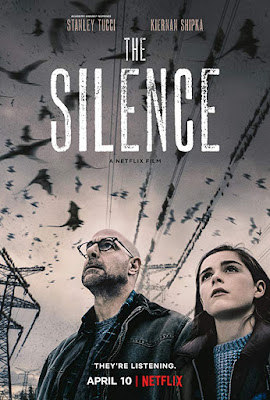 Sensory deprivation horror seems to the ‘it’ thing right now. Sure, there has been a lot of success lately in that sub-sub-genre of horror with accolades going to A Quiet Place and Bird Box drumming up a bit of online excitement (and poorly thought out viral videos) which seemingly overlook the low-key brilliance of Flanagan’s Hush, but there is always a balance to things. This is where The Silence comes in. This is on the other end of the spectrum. The bad end. Directed by the gentleman that gave us the underwhelming Annabelle, The Silence takes the silent slant of A Quiet Place and mixes it with the monster mayhem of Bats. Conceptionally, that’s a great combination if I’ve ever heard one. Partner that with a semi-impressive cast – who doesn’t love Stanley Tucci? – and The Silence should have been a shoo-in for one of the more entertaining horror films of the year.

Which is why it’s so perplexing that The Silence is so incredibly boring. Outside of a few unintentionally hilarious moments, particularly one where our protagonist family stumbles onto a farm whose owner bites the dust in a way that earns a hearty chuckle, this film tends to be both predictable, incohesive, and oddly shallow. The Silence is so focused on delivering a – pun intended – batshit insane plot that it spends almost no time building chemistry between the characters of the family and, thus, their life or death situations, at the hands of lizard/bug/bats called Vesps for Godzilla’s sake, come with almost no sense of tension or emotional punch. To add to the seemingly awkward film, it then takes a very perplexing turn in the third act by introducing some kind of religious cult that sort of shows up to create havoc because that seemed like fun? By the time the credits started to roll, I couldn’t help but wonder if anyone bothered to actually write a script or if they just had an outline and were making it up as they went like some kind of improv show gone horribly off the rails.

There are a few things to enjoy, namely some of the unintentional humor and a few moments here or there, but the bulk of The Silence is just incoherent. The needless voice-over narration, the poor family development, the intense focus on trying to get an audience to believe that ancient lizard bats could even be feasible, and the late curveball of religious cults just make for a jumbled and muddy misfire. Honestly, I wanted The Silence to work just for the strangeness of its concept, but the film that eventually dropped on Netflix didn’t capitalize on any of its strengths. 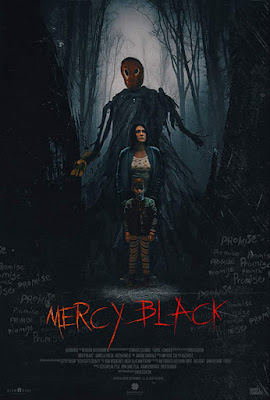 I’m not sure Mercy Black would have ever really made it onto my viewing queue if it wasn’t a) available via Netflix streaming or b) a Blumhouse production. It has a couple of key names attached to it, including director Own Egerton who gave us the surprisingly fun Blood Fest last year, but there was nothing all that spectacular in the premise or creative teams that perked my interest for me to seek it out with vigor. Much to my surprise, Mercy Black is a tight little supernatural horror flick. It’s not a film that blew me away, but as a bit of a surface level horror film, it works in some effective ways and carries pretty intriguing mythology with it.

The reason that Mercy Black works at all is how the narrative plays out as it goes. It introduces the audience to a woman, Marina (played with a respectable amount of vulnerability by Daniella Pineda,) who is being released from a psychiatric facility after 15 years. It’s revealed as a goes that as a young girl she was involved with a shocking incident which she blamed on a supernatural creature/person called Mercy Black. As she returns home to her sister and her nephew, she finds that perhaps Mercy Black was not the figment of her imagination as she was told. What the film does at this point is it creates a slick narrative gray area that works on both a more traditional haunted house scare level and as a psychological thriller. As Marina starts to unravel her own past, the film plays up this great atmosphere and develops intriguing mythology around the titular villain. Granted, this concept has been done before in the horror genre to some degree and it can be predictable enough at times, but the execution itself is done with a certain amount of heart and soul that really carries the film. Some solid performances carry some of that weight and the film plays on the audience’s expectations in some fun ways in the second half of the film which makes for a fun little watch.

Although I’m not sure if Mercy Black is going to hold up on repeated viewings once the whole story has been revealed, for a first time watch the film does some great things with its concepts that do make it worth the time to check out. There are times where the film might have dug a bit deeper into some of its themes or held onto some of the more challenging emotional portions, particularly as its revealed that Mercy Black may not be the villain others think she is, but some decent performances, a few solid scares, and a rather intriguing third act make Mercy Black a nice little gem to find on Netflix.