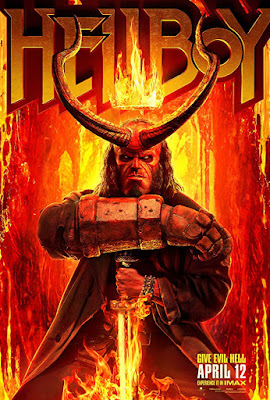 For those who were fans of Guillermo del Toro’s Hellboy films, the choice for producers to reboot the franchise instead of allowing him to finish his trilogy was one that left a sour taste in the mouth. Most of the behind the scenes shenanigans of the industry are left in the shadows though so no one really knows the why we ended up with a new Hellboy. It is what it is and I went into Hellboy 2019 with an open mind. There was a lot to be hopeful for in this reboot, at least on paper, when it was announced and yet the film remained a wild card for the year. Actually, a wild card is a decent term to use when referencing this version of Hellboy. On one hand, there are things that do work for the film and when those things are working the film is a riot. That's Hellboy's normal hand Unfortunately, the other hand is Hellboy's massive right hand and that is the majority of the film and the best way to describe that is underwhelming. Combine the two together and you get a film that’s a pure wild card piece of cinema.

At the center of Hellboy, there were a lot of great decisions made to have the film be successful. The choice for the film to be R-rated. Awesome. Embracing the horror elements? Absolutely. The cast they hired was impressive, even if David Harbour was going to be compared to Ron Perlman 100% of the time. To top it off, they hired Neil Marshall to helm the film and that’s what got me most excited. The guy knows how to genre bend. Knowing all of this, as long as the script was solid, this should have been a shoo-in for a great genre flick. All they had to do was make the pieces fit.

…or they could just jam them together in the most forced and uneven way imaginable. You know, whatever works.

That is the inherent problem with Hellboy. For every idea that should work, there’s a baffling choice around it. It seems like the producers and studios have no faith at all in the creative elements at work in the film and they consistently second guess everything. Now that rumors are starting to circulate about a supposedly problematic production, that seems to be the case if you judge by what’s on the screen. The film focuses on monsters and violence, but then it plasters incredibly inferior CGI with it and edits many of the sequences in strange ways. The film embraces the horror elements, but then there are a ton of really awkward added voice over jokes thrown in (flatly, might I add) that feel incredibly out of place. They hire all of these charming people with screen presence and then the script consistently undermines their characters by giving them forced dialogue and then having them lift the plot of three films. It’s baffling. Even with all of this, it’s the script and narrative that cuts out the legs of the film. It never finds its rhythm, leaping from plot to character back to plot. At first, it seems smart to not have the film be an origin story for the titular character, but then it spends a large portion of it jumping back for flashbacks of each of the main character’s origins. As the saying goes, the plot gets in front of the story here.

Fortunately, it’s not all doom and gloom with Hellboy. As I said, although the execution of the film and the script is patchy at best, there is some fun to be had with it and when it finds the elements coming together. There are two key sequences that worked really well for me and that’s the Baba Yaga sequence, although in the grand scheme of the film it’s definitely a “convenience” device to move the plot forward faster, and the final moment before the credits where we see the three main characters working together as a team in a “no-cut” action sequence to leave the film on a cliffhanger. In these sequences, we get to see the charm of the characters, a simplified plot device, and visual flair. This is what Hellboy should have been and yet, it’s just two sequences in a much bigger (and muddled) film. It should also be mentioned that the cast seems game to dive into the film. David Harbour gives a strong performance and the principal cast around him play what’s needed. It’s just so unfortunate that the script and narrative let them down.

For those Hellboy fans out there, this 2019 reboot is not quite the launch of a new franchise that one would hope for. There are some great things in there – hell, there might even be a great film in there somewhere, but what is given to the audience is not that film. The script and narrative are messy, the editing and visual effects are problematic, and the film never finds its voice as it doubles back on many of its bolder choices. When it works, one can see the film that Hellboy could have been. It’s just too bad this is what we ended up with.

I guess they will just try to reboot it again in the next decade.

Written By Matt Reifschneider
Posted by DarkReif at 9:39 PM