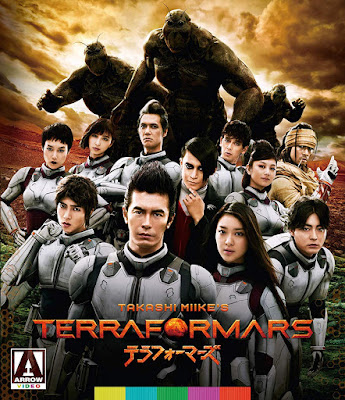 Although I am not personally familiar with the source material for Terra Formars, it was the kind of manga that stirred a lot of fandom. It spawned a lot of different media around its ideas and it was only a matter of time before it received some kind of live action feature film adaptation. What made this live action version so tempting though was not the strange concepts or science fiction/horror/action elements it could utilize as both entertainment and thematic messaging, it was that Takashi Miike was helming the project. After multiple successful adaptations of manga and anime series to live action, including the wildly fun Ace Attorney, the combination could prove too enticing for its own good. Slather the film in some big names from Japan and it would see like the film could make a pretty big splash.

It then took almost 3 years for the live action Terra Formars to come to the US.

There are multiple reasons for this and, fortunately, the film did receive a fairly robust Blu Ray release from Arrow Video. Yet, the initial mixed reviews and a strangely hollow post release reaction by fans and critics alike seemed to kill a lot of momentum the film had in reaching larger audiences. While it certainly leans heavily into Miike’s ability to punch out a spectacle driven and eye-rollingly silly blockbuster affair, Terra Formars has such a weak foundation to it that no matter how many big stars litter the ensemble or how silly the action can be, the film tends to crumble under the slightest bit of scrutiny. For most people here in the US, it’s going to be the Miike connection that warrants the purchase (and I’m certainly happy to have it in my collection) and not the quality of the film itself.

Immediately as the film starts, Terra Formars is showing its weaknesses. Within 9 minutes of the film starting, we are already introduced to a half dozen characters to the massive ensemble cast and the film has to lay out the futuristic science fiction backdrop of why humanity has tried to terraform Mars. Within 9 minutes, the film already has the entire group of “pests of humanity,” chosen to go to Mars to wipe out the cockroach population that has taken hold there in the process of changing he climate, on the planet, trained, and ready to do some bug killing. This is not nearly enough time to truly get to know any of the characters, digest the plot, and start pursuing the narrative. It’s as if the film throws its audience into this cinematic world and hopes beyond all hope that they survive to the end. For those more familiar with the source material, perhaps that’s not such a hard sell. For those like myself who went in fresh faced, it’s a problematic wake up call and it feels rushed and thin.

As the film progresses from there, it doesn’t really stop much to take a breather either. Terra Formars is far more interested in its sprint from action set piece to action set piece then it is in developing any of the character relationships or thematic layering. While this ultimately creates an entertaining film, if you’re willing to just go with its outlandish premises of DNA mixed superpowers and science fiction techno-babble, it also creates a film that feels more like a hollow experience than something as effective as it might have been. To its benefit, it truly feels like Miike is having a lot of fun with the strange experience of watching this film. He embraces the weird visuals and as the astronomical body count rises (seriously, there are sequences at the end where there are more body parts on the ground than places for characters to walk) the film generally just says “fuck it” and stops trying to explain things as they happen. As our ensemble is picked apart there is very little emotion to be felt despite some decent efforts by the cast to take their roles seriously, but I will admit that the craziness level does hit a strange sweet spot for my love of insanity on screen.

This Blu Ray release does come with a handful of special features that should have fans of the film or fans of Arrow happy enough. It comes with a feature length documentary that’s perhaps the highlight of the release and, as always, the booklet writing from Tom Mes is a necessary addition to the package. Although this release is not nearly as feature heavy as most of Arrow’s releases, it’s enough to fill out the disc and give a lot more context to the film.

In the end, although Terra Formars ends up being one of Miike’s lesser films to get a US release, it is a film that serves its purpose as a big, silly spectacle driven blockbuster. There’s some entertainment to be had with the characters and all of their outlandish powers and Miike seems to be having a lot of fun in bringing the genre bending story to the screen. It’s just massively unfortunate that the script and narrative are in such disarray. There’s just not enough time to develop anything to a point where an audience cares too much about the outcome of the story. Terra Formars is entertaining, but it’s also a rather hollow cinematic experience best taken with the brain power turned down. 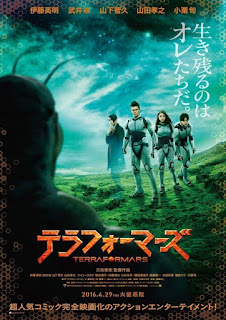