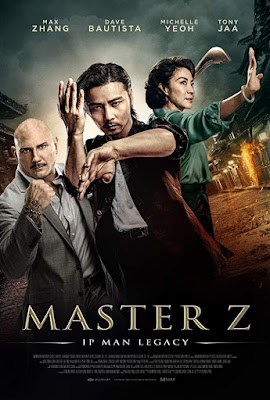 Let’s be honest here. I’m a sucker for the Ip Man movies. I know that, despite their popularity, that there are people out there that do not buy into them and that’s just fine. I’m someone that simply loves the blend of modern elements in what could easily be old school kung fu films. In particular, the “villain” of Ip Man 3 is one of the highlights of the series. Played by the now A-list Chinese megastar Max Zhang, he stole that film in a lot of ways and his final three-part one-on-one fight with Donnie Yen is phenomenal. Turns out I wasn’t the only person that thought he was great because now he has his own spin-off film, Master Z: Ip Man Legacy. Fortunately, this first – of probably many – spin-offs is a great continuation of the series that has the same blend of modern and old but does it with a sense of style that director Yuen Woo Ping brings to the table. It’s not going to be knocking off socks with its reliance on traditional kung fu tropes and the occasionally muddy script, but it’s going to highly entertain and keep the story and character moving forward. Master Z is a blissful modern martial arts flick with enough heart to power its bigger than life action.

After the events of the third Ip Man film, Max Zhang’s Cheung Tin-Chi moves to Hong Kong with his son to find a life away from the martial arts world. His loss has left him empty and he seemingly floats through life, running a small store and trying to forget his past. However, when a ruthless gangster, played by Kevin Cheng, clashes with his sister, played by Michelle Yeoh, over the direction of the crime syndicate he starts to flood the streets with drugs provided by foreigners. Soon Cheung Tin-Chi finds his family caught in a web of corruption and violence, leaving him but one choice – return to his ass-kicking martial arts ways to save his family and clean up the streets.

As you can probably gather from the above synopsis, Master Z is a fairly standard martial arts film at its core. The wandering hero accidentally gets on the wrong side of some arrogant villains and he ends up fighting for justice. There are evil foreign villains, personified by the hulking stature and stoic brutality of Dave Bautista, and everyone learns some general life lessons about the reason that martial arts exist. While Ip Man only appears in flashbacks, this film is definitely a continuation of Zhang’s character from the last film and it adds a strange amount of depth to him. He’s a man who believes he has lost it all through his arrogance in his skills and he abandons martial arts. Like a lot of classic kung fu films, Master Z focuses on having Cheung Tin-Chi realize that his skills were never about being the best, but fighting for what’s right. The film is taking the villain from a previous film and setting him on a new path and watching him rise from the rubble to be the hero. Now, again, this is pretty standard kung fu material, but with a strong Zhang performance and a lot of heart about building one’s life back up, the film is able to create a rather impressive foundation for the action to rest on.

Master Z also features some great themes about family as Cheung Tin-Chi and his son try to find their place in a new city and that parallels to an intriguing relationship between two of the villains (Michelle Yeoh and Kevin Cheng) as the film injects plenty of family material. If anything, most of the plot featuring the foreigners, police corruption, and a surprise secondary plot featuring a fedora-wearing Tony Jaa as an assassin (which is easily the most perplexing part of the film and feels very much like it’s meant to be laying the groundwork for a sequel) are almost not needed outside of driving the overall narrative forward. This plot is an obvious attempt at times to work around Chinese censors by making paper-thin foreigners the bad guys and then layering the Chinese characters to not be out-and-out villains, but it does feel a bit muddy at times and a tad bloated when one considers how effective the familial parallels between the crime syndicate and Cheung Tin-Chi’s relationship with his new family are in the plot. I can't really blame them for some of these choices, particularly since Hollywood is notorious for creating paper-thin villains out of foreigners, but the script still could have used a bit of trimming.

Fortunately, by giving the film lots of new characters and conflicting villains, Master Z is packed to the brim with action. Although some martial arts fans might be disappointed in the use of some wire work in the film, it’s to be expected from newer Yuen Woo Ping cinema and here the balance is relatively effective. Max Zhang gets to display his incredible screen presence as an action star and the film delivers on plenty of great fight sequences to get the blood moving. Whether it’s the above mentioned Zhang versus Jaa fight, the wire-work heavy fight on the neon billboards of the street, a brawling gang battle with enough broken furniture and clanging swords to rattle the skull or a surprisingly spectacular finale between Zhang and Bautista (a true David and Goliath match from a visual perspective), this film is not letting any moment go to waste. Yuen Woo Ping, although pushing well into his 70's at this point, shoots the action in classic fashion with plenty of wide shots and intense choreography being the highlight of his film. It helps that he sets the film in some fantastic sets, utilizing the East meets West look of a stylized Hong Kong of the time period to strong effect. However, for action fans all you need to know that this film does not shy away from a well shot and choreographed fight. Then it packs a lot of them into the run time.

All in all, Master Z: Ip Man Legacy is a surprisingly effective spin-off. The robust and exaggerated design of the film gives it its own visual style while a stunning cast gets to charm and fight their way through the rather trope laden and formulaic plot. The action is blisteringly fun and diverse, the familial themes work to give the film quite a bit of heart, and the entertainment that comes out of every nook and cranny is exciting. Sure, the plot could have been trimmed and tightened up and the obvious threading for future films is occasionally thin, but it was hard not to love Master Z for all of its strong elements. Like the films it was spun from, it’s a fantastic blend of modern and classic. It might be called Ip Man Legacy, but it’s obvious they are looking to start their own Cheung Tin-Chi Legacy while they are at it. If that’s the intent, then bless their hearts. I’ll be here for the next film.