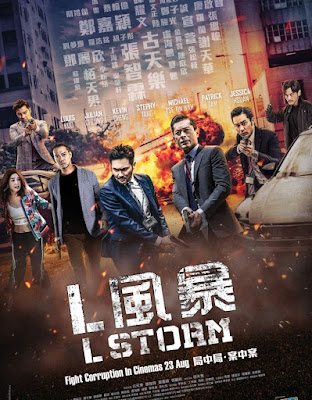 As the fourth entry of the series hits theaters and a fifth entry that is looming in the distance, it was probably about time that I go around to seeing L Storm, the third entry into this ICAC focused action thriller franchise. It’s a bit of a chore, truthfully. This series has never been a favorite of mine and my less than lukewarm reviews for both predecessors, Z Storm and S Storm, have certainly kept my expectations low for the rest of the series. Fortunately, this third entry is easily the best one thus far, but once again it’s the massively problematic execution of a rather fun idea that hampers the film from being all that impressive and drags it down to mediocre levels.

Louis Koo returns once again as Luk, a senior member of ICAC, which is a law enforcement division dedicated to investigating corruption on all kinds of levels. This time around, Luk and his team (which isn’t much of a team this time around) are investigating possible corruption with massive money laundering scheme and team up with the investigators for money laundering. The big problem is that the baddies this time around know that ICAC and others will be onto them and when a large sum of money mysteriously shows up in his bank account, he is framed for possible corruption.

Now, for the record, the core idea of this film actually works for me. Some of the writing is pretty problematic and the film desperately needed to have a lot more character development to work outside of showcasing each person as a cog in the plot’s machine, but the idea is a lot of fun. The two teams tackling the same case, the inclusion of internal affairs investigating our hero, and the general reveal of the villainous plan and the various baddies involved was kind of fun to watch come together. Between the thin character development though and the relatively cold performances from many of the main actors make the film feel a lot hollower than it should as the plot plays out. Once again, the big draw of the film is Louis Koo, but he relatively sleep walks through most of the film – which includes one of least effective torture interrogations ever put on film. This goes for most of the cast, although that does not include some of the smaller roles for the villains who seem to revel in the being so evil.

Like the previous two films, it’s not necessarily the ideas or somewhat patchy narrative that derail the film, it’s the execution of those. David Lam, who has directed all of the films thus far, returns here once again to deliver some of the most perplexing choices in style. L Storm continues to utilize a made-for-TV aesthetic in the visuals, using melodramatic zooms, whooshing noises in transitions, and plenty of head scratching edits. The one thing that takes a much improved turn is the action this time around. Although the film still uses awkward slow motion and the occasional poorly rendered CGI, the overall fight work and action improves quite a bit. A fight sequence on a boat in the third act or a few chase sequences allow the film to showcase some of that old school Hong Kong style and this is where the film is generally able to top its predecessors.

With three films in and two more on the way, one might expect L Storm to be a lot better, honestly. It still suffers from main of the major issues that plague the other films, including a yawn inducing performance from the usually reliable Louis Koo and another ham fisted and confusing directorial job from David Lam, but a fun premise and more cohesive action sequences do make L Storm a step up. Now it’s time to see P Storm which is playing in limited theaters in the US (!) and see if this money making franchise can still continue to get better.