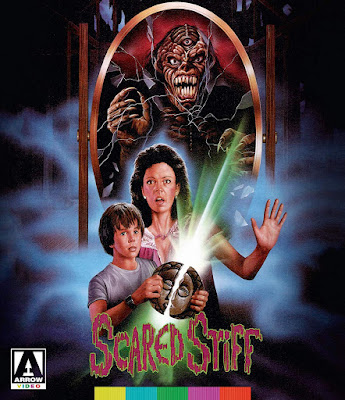 Scared Stiff was always one of those films that my friends and colleagues would reference, but no one I knew had actually seen it. If they had, they certainly didn’t make a lot of noise about it. This made it one of those films that I was very excited to finally partake in, particularly when it was announced that it would get the Arrow treatment. While the film certainly earns its place as a cult horror film for a variety of reasons, particularly with the ambitiously wild third act, Scared Stiff is not nearly the film that I expected. Between the story and the growing insanity of the what is presented onscreen as the film plays on, Scared Stiff does take a long time to set up its relatively straight forward premise and it never quite finds the proper balance between seriousness and humor.

It was already too late, after finishing the film, that the realization of who directed the film came to me. Truthfully, I’ve only had the pleasure of seeing one other film from director Richard Friedman and that was the divisive Doom Asylum. Although that film also received a release from Arrow Video, you can read my review for it HERE, it would have better prepared me for what was going to happen in Scared Stiff had I understood that. It’s my hope that, if you’re a horror fan reading this, that it be known that Scared Stiff and Doom Asylum could essentially be a great double feature for the kinds of films that they are.

Scared Stiff is a fascinating film in a lot of the wrong ways. The tonal misbalance, in particular, tends to be a large part of why the film could have been incredible but fails to capture its identity. The main plot focuses on a pop singer who takes her son and moves in with her therapist boyfriend into a brand-new house. Already, there’s some great drama to be utilized here with a family finding their own balance as changes go on around them. Hell, they move into the haunted house of a now dead slave trader to add to it.  Then it’s revealed that our protagonist Kate, played with a decent performance by Mary Page Keller, has had some psychiatric issues in the past too. There are so many opportunities for classic psychological horror and layers to be added in for social issues to challenge familial dynamics. Although the film does toy with both of those, adding in a The Shining knock-off idea about domestic violence, it doesn’t know if it wants to play with them seriously or as potential pieces for humor and wishy-washes between the two sides.

Due to this inability to make a firm choice in tone, Scared Stiff ends up spending most of the first two acts laying plot and playing with tone instead of building the proper amount of tension as the supernatural elements begin to come into play. Fortunately, after it meanders through the first two acts, it does almost redeem the entire film with a wild and wacky third act. This is where Scared Stiff finds its second wind. It adds in a ton of nightmare logic, it jams in some great visuals and even pulls out some great special effects to cap things off. The makeup and fluid 80s camp surrealism make for an entertaining watch and it’s in this final third of the film that Scared Stiff shows why it has earned its cult following over the years.

As for the special features included on the disc, Arrow once again brings out the big guns for both established fans and newbies alike. The new 2K restoration is fantastic which brings forward a lot of the great visuals that director Friedman uses in the film (including a great mirror moment that’s worth a second look) and both a new commentary and a new documentary do add a lot of context to the film that shows just how much effort went into the film. As always, the features are listed below, but for Arrow fans, there is some solid work in the features that adds a lot of content to the film.

For those who enjoyed Doom Asylum, then it’s easy to recommend Scared Stiff. When the film starts to get moving, it shows its real colors and that final act almost saves the entire film from being a rather mediocre experience. The great effects, the strange nightmare atmosphere, and silly 80s movements make it entertaining enough to recommend to those out there that are looking for that cult experience. It’s just unfortunate that Scared Stiff lacks the foundational work and sense of urgency in the first two acts to carry the film further upwards as a true overlooked gem. It ultimately gets a mild recommendation for those looking to watch with friends. 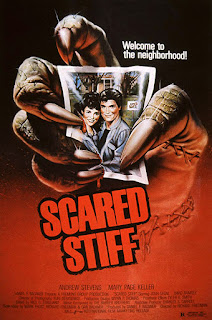