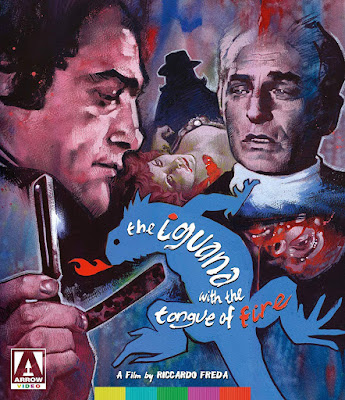 Since I’ve started digging into giallo films with more purpose over the last handful of years, Arrow Video has been a cornerstone for finding some of the best that the genre has to offer in great releases. Whether it’s classics like Bird with the Crystal Plumage, fringe films like The Fifth Cord, or exploitative ones in the ilk of Strip Nude for Your Killer, more often than not when Arrow releases a giallo it’s worth seeing. In the case of their latest release, The Iguana with the Tongue of Fire, its significance falls more in being one of the last films directed by Riccardo Freda more than anything. Although the director was hardly pigeonholed into any one particular genre, his early work to spur the Italian film industry cannot be understated. However, The Iguana with the Tongue of Fire is not necessarily a great film compared to many of its giallo brethren. If anything, the film tends to play things a bit too loose with its narrative and would rather kick in intense spurts of blood rather than build a tense tonality or sharp pacing. For some giallo fans, this is still a welcome addition to the genre. For others, the film might be a bit too sporadic to rise to the upper echelons of the genre.

Like most films in the giallo genre, The Iguana with the Tongue of Fire sticks relatively close to the formulas. There are times when the film seemingly forces itself to find ways to inject those giallo moments into the film. Certainly, the plot plays into that as it follows an ex-cop who becomes embroiled in a murder mystery involving black gloves, straight razors, and some splashes of acid for good measure. The film takes the ol’ giallo checklist and checks off all of the boxes. Often enough, if one removes some of the strangeness and exploitative elements of the film, it would be boringly predictable. As a foundation, the blueprints work well enough to give the film just enough traction to get moving, but it’s not as rock solid as one would hope.

However, for a large part of the genre, it’s the style that sets aside the murder-mystery plots. This is where The Iguana with the Tongue of Fire is going to split its audience. Director Freda takes a melodramatic and almost hyper-realistic slant with the material here, one that rests right on the edge of realism but doesn’t quite go into any elements of fantasy or surrealism. At times, the choices made by characters and the narrative come off as almost comical due to this choice with sudden editing cuts, blatant use of patchy special effects for the kills, and strange obvious red herring moments (complete with over the top stinger shots in the score) and viewers are likely either to completely buy in or be alienated by it. Fortunately, the film is anchored by a decent performance from Luigi Pistilli as the rogue ex-cop who starts a love affair with the daughter of the Swiss ambassador at the center of the murder mystery, but even then the material doesn’t give him a lot of real emotional depth or character arc to carry. He does, however, get a handful of solid fight sequences that pump up the action and intensity as the narrative starts to get bogged down by the ‘whodunnit’ nature of its script. The rest of the cast seems game enough, but the fast-paced nature and the rising body count don’t allow a lot of them to portray anything more than stereotypes right down to an older woman who is both mostly blind and deaf. I’m sure you can already tell how that is going to play out.

As for the release itself, The Iguana with the Tongue of Fire is a pretty gorgeous set and Arrow, once again, showcases their love for the genre with how much effort they put into the release. Like usual, I’ve included a list of the features below and I’ve included a nice little trailer for the release embedded in the article that goes over the highlights. The new restoration brings out the fun visuals of the film, including some great use of diverse sets and the bright 70's style blood, and the features add a lot of great back story and context to the film that certainly allowed me to appreciate the film more. Perhaps the highlight of the release for me of the features goes to the video appreciation by Richard Dyer, although the commentary comes in a bold second to that.

The Iguana with the Tongue of Fire will end up dividing many of the giallo fans in the end. Although the film certainly has some fun ideas and some wild style, the incohesive tones and patchy execution of a formulaic script leave a lot of the film feeling too thin and reliant on its exploitative pieces. Fortunately, it’s a fantastic release from Arrow that’s packed with features and a great transfer for the film. Fans of the genre or the film itself will be missing out to not add the film to their collection just for the release, but if you’re looking for a great giallo there are a handful of others that will satiate the craving. The Iguana with the Tongue of Fire is for die hard giallo fans mostly. 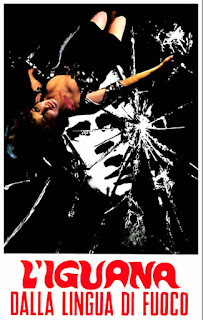