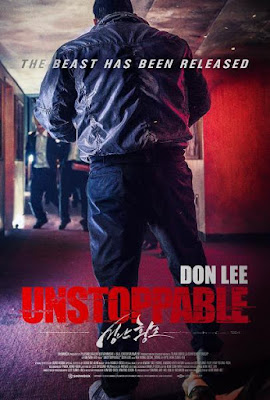 When Don Lee came erupting onto the international scene, thanks mostly to his film stealing secondary role as the tough husband in Train to Busan, it was a breath of fresh air. Compared to so many of the boyish looks and thin frames of most South Korean actors that starred in the films that made it to North American shores, he was a stark contrast that proved he had true screen presence and immense talent. Lately, he has been a staple of many South Korean international releases, proving to be one of the best additions to the second Last 49 Days film and holding his own with heart and drama in the arm-wrestling film, Champion. His latest, Unstoppable, only cements him as THE leading man of South Korean cinema right now. The film itself benefits greatly from him as an anchor for everything to hang onto as the narrative and tonal approach can be somewhat sticky, but in terms of a cinematic vehicle for Don Lee, Unstoppable is justifiably effective.

Don Lee, or as he is more commonly known Ma Dong-Seok, plays a hardworking husband who is desperately trying to give his wife the life he thinks she deserves. Some bad investments in the past have left their marriage a bit on the rocks, but he continually tries to do his best. When his wife is mysteriously taken, a gangster arrives with a bag full of money for him to look the other way. Needless to say, the only way he is looking is to get his wife back…at any cost.

Although the initial trailers would have one assume that Unstoppable is a pure action assault for 2 hours, the truth is that the film falls more squarely as thriller than the all-out action flick on display. This is both a blessing and a curse. It’s a blessing because the film spends a lot of time really developing the lead character and his relationship with his wife. The audience is privy to their marriage, the love and the hard times, and there is a sense that, despite his good intentions, Don Lee’s character Dong-chul is not one to necessarily think things through to the end. This intention to lay the ground work justifies the length that it takes (the first real action sequence doesn’t come until roughly 40 minutes into the film and, for the record, the title card doesn’t even show up until something like 18 minutes in) and there is a strong heart to why the film approaches its subject matter in this way. Don Lee continues to prove why he deserves the leading man status. Although his character is more formulaic this time around, his ability to be a formidable on screen and intimidating force while maintaining his heartfelt soft center (and a knack for comedy) comes in handy here. They give him a couple of partners as they attempt to uncover the identity of the kidnappers, but they mostly play comedic relief compared to Don Lee’s heart and muscle. The three spend most of the film uncovering clues and playing a bit of cat and mouse with the villain which is where the thriller elements come into play.

The action sequences, when they do arrive and increasingly in volume until the brutal and bombastic finale, are impressively well executed. Don Lee not only proves to be a cinematic powerhouse as an actor, but he holds his own in the fist-to-cuffs that show up. While Unstoppable certainly maintains its thriller foundations, more on that in a second, the action is incredibly well done. As the film moves forward, it picks up the pace significantly and it uses the action to punctuate the emotion and occasionally play up some comedic beats. There are three significant sequences that action fans will be cheering for, particularly a fantastic brawl in a hallway to kick off the third act. Not to give too much away, but when the action starts to flourish, it’s well done and well utilized to move the plot and narrative forward.

To go back to the thriller core, I did mention that it was both a blessing and a curse, but did not dig into why it would be a curse for Unstoppable. This is because, generally speaking, the South Korean cinema market does thrillers really, really well. As in, the standards for them are insanely sky high. This is where Unstoppable, despite all of its great aspects, tends to falter. Compared to some of its peers, it just doesn’t quite have the edge and the artistry to hit those upper echelons. Ultimately, Unstoppable is a fairly easy to consume film and its formulas and genre blending tend to play things safe. Even when the film wants to go darker, an intense standoff where the villain will drown his wife if he doesn’t kill a man comes to mind, it all seems fleeting and inconsequential in the overall scheme of the film. This happens quite often and many of the subplots, whether it’s the detective that plays a small role overall or an escape attempt by the wife, feel a bit more like padding than adding to the overall narrative. None of it is inherently bad or misguided, but it can be disappointing.

True to the name, Don Lee’s meteoric rise certainly seems Unstoppable. If anything, this film is a brilliant introduction to the star and his brand of brawn and heart. The film might be more formulaic and a tad too scattered in its narrative to be the best of his career, but it’s a brilliantly entertaining action thriller with another anchor weight performance from Don Lee. The action is brutally crisp and chemistry between characters is golden. For those looking for a thrilling, but easy to consume watch, than look no further than Unstoppable.