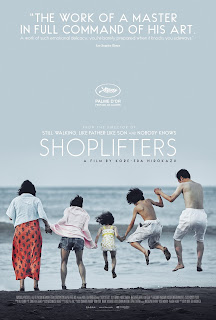 Going into a new Koreeda film is something to be excited about. Over the span of the dozen plus works of his I've seen, I've been impressed to varying degrees. One common thread spun throughout the entirety of his works I've seen thus far of his exploration of family and the core value of it. Others have done this before him, spanning entire careers, such as the always comparable Ozu, but none have done it in his unique way. This is a Koreeda picture, through and through, and it is one of his very finest to date.

The plot of Shoplifters is simple. A group of people, spanning in age groups from small children to elderly, all on the bottom fringes of the social stratophere, live in a small house together, getting by day to day, doing odd jobs and as the title explains, shoplifting to survive. During a trip home one night, the husband and wife of the family, played brilliantly by Lily Franky and Sakura Ando respectively, find a young girl, sitting out in the cold, obviously abused and without food. The two then discover the youthful girl's abusive parents and decide to take her under their wings.


That's all of the plot I wish to reveal, as the directions in which the narrative take are worth going in blind over. The majority of the film is typical Koreeda family affair, which is by no means a bad thing. The characters are brilliantly written and equally realized by powerhouse performances all across the board. Lily Franky really ups his already solid game as the father of the pack. He is funny as per many a Lily role, but he brings a pain not often felt in his other works. He drew out emotions from me that I was completely taken aback by. The two children of the film, Kairi Jyo and Miyu Sasaki give heartbreaking performances and their chemistry makes for some of the best I've seen in some time.

The real star of the show though is none other than the endlessly impressive Sakura Ando of Love Exposure and 100 Yen Love fame, who gives a career defining moment as she fully dives into my favorite on-screen performance of 2018. She is warm and charming and brings the full nuances and wide range of emotion that intricately unravels the complexities  of her character as her fascinating arc unfolds. Many moments from her have engrained themselves in my mind and I don't expect they'll be leaving anytime soon. Sakura Ando is on an entirely different level here.


Before moving on, I will bring this review to a screeching halt and take the time to appreciate the brilliance of recently lost legend, actress Kiki Kirin, who gives yet again another marvelous turn as the family's grandmother. We see the pain without a doubt that Mrs. Kiki was going through here during her final stretch of life, but it doesn't get in the way of her brilliance on display. One of cinema's finest assets, gone on to the next part of this journey. We will all miss you greatly Kiki Kirin! Thank you endlessly! 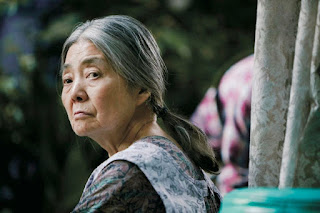 Technically speaking, Shoplifters may be Koreeda's strongest to date. The cinematography is absolutely stunning and the set design of the house makes it feel truly inhabited. The layers of dirt and the sweat on the characters' bodies and faces as they carry on their daily lives, the changing of the seasons. Everything is so natural and lived in. The craftsmanship is something to truly commend. The score is another highlight, ranging from smooth and jazzy to subtly present during the heavier moments of the film. The accolades for this one are going to be non-stop and are truly worthy of every nomination and win possible.

Shoplifters is Japan's entry to the forthcoming Academy Awards for Best Foreign Language Film, and I truly hope it sees itself on stage being presented with a win. It is a deep examination of family and the core value and belief of what makes up one. It is safe to say that this is easily one of 2018's strongest cinematic offerings and perhaps Hirokazu Koreeda's best outing thus far. Do yourself a favor and see this film! Every type of cinena goer will find plenty here to love.