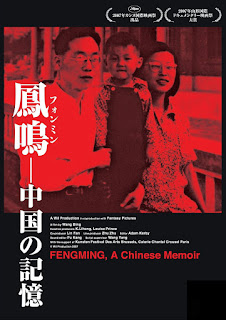 Continuing my exploration of documentarian Wang Bing's body of works, this time around I gave Fengming, a Chinese Memoir a go, and per usual with a Wang film, it completely put me through the ringer.

A three hour interview with He Fengming, an elderly woman who recounts her harsh life in China after the year 1949, having faced gruelling hardships as a falsely accused rightist during the Anti-Rightist campaign and the Cultural Revolution, spanning more than three decades.


He Fengming went on to write a book on her experience and apparently a reading of said book brought Wang's attention to her and he set out to meet and interview her in the mid-90s, conducting a 50 minute interview, which he would years later add on to, thus giving us the three hour interview we have in its final 2007 released version. It works flawlessly as I never realized a difference throughout.

The style here is remarkably stripped back, even for Wang, with a one camera set up that very rarely relies on a dissolve or cutting technique, mostly happening when He Fengming got an unexpected call on her home phone, or needed a quick restroom break.


The depth and detail in which the interview explores is no less than heartbreaking and the stories told are exhausting and really wears on one emotionally. The things people went through during this time are beyond wretched and Fengming's own experience was no exception. The loss of family members and widespread famine due to food shortages are just the scratch of a surface that runs very deeply. By the end of three hours, I was a complete mess.

I do wonder if her book was ever translated into English, and I feel I must seek out more on this brave woman. Wang Bing's Dead Souls is the perfect companion piece to Fengming, a Chinese Memoir and I most certainly highly recommend both. I have yet to find a WB film that fails to impress me. Quickly becoming one of my very favorite filmmakers.