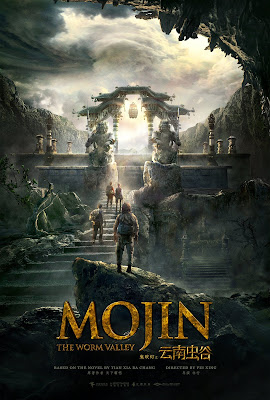 To properly set up this review, particularly for those outside of China, we need to talk a little bit about where Mojin: The Worm Valley started and a brief history of what has happened. The Mojin ‘series’ is based on a collection of books first published in 2006 that became a wild success. The books were quickly purchased by two of the major studios in China, with half going to one studio (which made the film Chronicles of a Ghostly Tribe based on their titles) and the other half went to Wanda Pictures which developed their first film, Mojin: The Lost Legend in 2015. The latter film was a significant box office bit in China, even if the film itself was met with some mixed reviews (you can read my review HERE) and so a sequel was bound to happen.


Yet, it took four years for Mojin: The Worm Valley to arrive in theaters. Along with that, there was the strange decision to recast the entire film, despite a stellar original cast which was easily one of the highlights. Both of these came as something of a shock. Still, there was some hope in my heart that The Worm Valley would find that same Hollywood sense of adventurous fun to deliver the spectacle and charm of the original and bypass these two indicators of a problematic film. One could hope, right?

Now the reason that this review starts with a brief history of the franchise from the books to competing franchises to this ill-fitting follow up is that there is a general tone that doesn’t work for The Worm Valley that’s connected to it. My assumption as I was watching it is that it’s a prequel to the first film, where two of the main characters, Shirly and Hu Bayi, have not yet fully gotten together (to split apart as they are in the beginning of The Lost Legend) which would also explain the strange idea of recasting the film. Unfortunately, since I have not read the books (and could not find a legal English translation for them – despite wanting to read them) I have no idea where The Worm Valley is meant to take place inside of the grander timeline. Perhaps fans of the books will have a better understanding of the film’s context, but for those outside of that world, The Worm Valley feels as though there are major contextual pieces missing and it detracts from the overall experience.

Of course, in terms of execution, The Worm Valley doesn’t quite get there either. What’s fascinating about this film is that so many of the right things from the first one are seemingly missing from the mix. The cast lacks any kind of chemistry, the team of treasure hunters, converted from grave robbers in the books for the sake of Chinese censors, has a lot more characters that don’t nearly get enough time for development, and the film loses the balance between grounded emotional adventure and the fantasy mysticism. The results are a film that strings together a series of random monster filled, spectacle driven action adventure sequences with lots of cliché and poorly developed character and plot beats in-between that is meant to serve as a script. The balance is wack-a-doodle and the film never finds footing to give itself the depth and heart needed. There is a mixture of romance, one eye-rolling ‘call to arms’ monologue by our semi-rugged leader of the group, and some hammy humor, but the film just doesn’t have the chemistry or self-awareness to pull it off. It’s too serious and too cheesy at the same time so it all ends up feeling trite.

Now it’s not all doom and gloom when it comes to The Worm Valley. The action itself is a lot of fun and there is some creative stuff in there for fans of the fantasy adventure film. The film spends very little time before thrusting its audience into its break neck pacing of plot, starting with a myth for our team to investigate, and even within the first act they are well on their way to the titular ‘worm valley’ which features no worms, really. There are plenty of monsters to battle, whether it’s giant lizards, swarms of bugs, ravenous fish, or even a giant crawdad and while the CGI is horrible hit or miss (par for the course in Chinese cinema) there is an eye for fun moments to be had here. The adventure is non-stop, the thrills plentiful, and even when it’s disjointed and just plain outlandish, there is a sense of fun underneath it all. The film gets bonus points for having a fantastic and silly final spin in the last act, only to lose them by essentially dropping a ‘to be continued’ final cliffhanger.

Perhaps Mojin: The Worm Valley works for fans of the books or those who are willing to forgive the many, many problematic foundations and executions, but it is most certainly a massive step down from the previous film. It has some fun elements to it, thanks to a it’s intent on throwing as much spectacle at the audience to see what sticks, but issues with its character development, a lacking sense of charm to the script, and predictable plot beats make it a massive missed opportunity. I’m not sure if it was meant to continue the franchise or reboot it, but either way it panders a lot of its potential. Recommended for fans mostly.