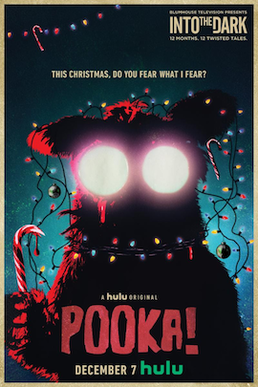 It’s another month and it’s time for another review for the next film in Hulu and Blumhouse’s Into the Dark series. This time, it’s the highly anticipated Pooka! from the cult director Nacho Vigalondo. To recap where things have gone since the beginning of the series in October, you can read our reviews for The Body [HERE] and Flesh & Blood [HERE]. Despite a bit of a dip in quality in November’s Thanksgiving set second film, this third one was ripe to embrace the Christmas holiday time frame setting by having such a challenging director handle a concept that’s…pretty entertaining. Pooka!, focusing on the story of an actor who starts to lose his grip on reality after becoming the sole person to don the Pooka! character costume for a line of intensely popular kids’ toys around Christmas, is just as oddball as one might expect. Granted, the film does take some narrative shifts that can be a tad predictable in the third act for more attentive viewers, the ride is a splendidly dark and humorous one that trips heavily into Twilight Zone territory.

Like the previous two, the holiday in question that the film utilizes as part of its setting is not necessarily a corner stone for it to work. While Pooka! uses the Christmas-time to drive home some key visuals, particularly the use of lighting, Christmas trees, and the general sense of corporate driven consumerism with advertising and what not, the film itself more or less could have existed at most any time frame and still worked. Since the narrative takes place in a place that isn’t traditionally ‘Christmassy’ in the look (no snow, no bundled-up characters) it does allow the story to be both Christmas leaning, but more universal. It’s generally a smart choice overall since the film will work to watch any time of year.

Naturally, with a director like Vigalondo at the helm, Pooka! is going to be a film with a lot of quirks to it. Vigalondo is not known for playing it safe with his films and, more often than not, his ability to challenge genre stereotypes and tropes is divisive among viewers. Pooka! is no different. Although the film has a more traditional Twilight Zone inspired narrative structure, introducing the audience to the character, watching him spiral into stranger and stranger waters, a third act twist that reveals the meaning of it all – both plot wise and morally, Vigalondo adds enough of a nightmarish horror element to it that it feels challenging to that structure throughout. The use of the mascot outfit, with its massive headlight eyes, the bright color schemes, and the blurred sense of reality as the film goes on to parallel the lead character’s mental state, are all fantastic and effective as visual and tonal key moments. As it originally starts off as darkly humorous, the film gradually makes it more and more threatening (with still that sly humor injected in) as it goes and the results make a for a wild ride.

As mentioned though, Pooka! does tend to fall into more traditional and predictable pastures as it goes which can seem a bit disappointing considering how Vigalondo has punched some great heart and messages into a lot of his films (Colossal and Time Crimes, for example.) The performances are great, particularly from Nyasha Hatendi, and the execution of the visuals and style is top notch. As the various elements are explained and revealed though, it feels more like it was supposed to be all neatly tied together in a bow. Perhaps it was my expectations of the director, but a large part of me felt that in a film that plays things so off kilter and quirky, the last act feels too consumer friendly.

In the end though, Pooka! is a step up from the previous month’s entry and quite the entertaining horror fantasy romp. Vigalondo slathers the film in some great atmosphere and nightmarish imagery that balances the dark humor and threatening dream logic well and the performances are all fantastic in finding that balance too. The design of the mascot is simple, but instantly memorable. Unfortunately, the narrative starts to crumble a bit much in the third act which hinders the overall experience, but once again Into the Dark does deliver a fascinating and fun film.