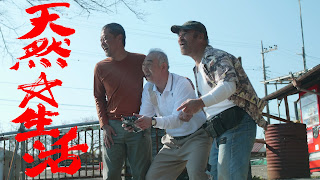 Director Tadashi Nagayama completely threw me off guard last year (2017) when he sent me his previous film, Journey of the Tortoise, a road movie a about a strange uncle, his nephew, and a tortoise, in late December... which shook up my Top 15 Japanese Films of the Year list, which was pretty set in concrete at that point, in the end climbing to the #5 spot. Needless to say when I caught word that the up and coming director had a new film completed, I became excited. After months of unexpected delays, I finally had a chance to watch Being Natural, which was most certainly worth the unintentional wait.

Taka (Yohta Kawase), is a jobless and carefree spirit, who beats on his bongos and lives with his elderly uncle, who unfortunately passes away unexpectedly one night. When the home's new owner, Mitsu (Shoichiro Tanigawa) comes to realize Taka is without a job, he decides to offer him one as opposed to kicking him to the curb, a fear which is quickly alleviated in Taka's worrisome mind. Seemingly happy and content with his new and still very simple life, things are quickly uprooted when an estranged couple and their daughter show up one day from the city. They are trying to open up an 'all natural' restaurant, in an old house, seemingly set to push he and Mitsu out of their home. Things start off quirky and goofy and go completely off the the rails by the final stretch. Some will go for it and others won't. I was laughing the entire ride.


While I think I prefer Tadashi's previous outing just a bit more, there is still plenty to love here. For starts, as with his last, the cinematography here is completely gorgeous, with nearly every frame looking like a beautiful photo. The color pallete, and framing in each shot is a feast for the eyes. One thing is certain, Tadashi Nagayama certainly has one impressive visual eye. The music throughout is fantastic too, playing to the narrative and comedy in equal measure. Characters are very memorable and well written, each having small, but fleshed out arcs and the story goes to many unexpected places. The drama is small, but impacting when it happens and the three leading men share the perfect chemistry with one another.

There is every type of comedy in here: light-hearted, dark, physical, visual gags, and so on. Some moments work perfectly and others are admiral missteps. Most of the time I couldn't stop laughing but certain moments seemed to fall a little flat, not damaging the overall experience too much. It has a ton of heart and craftsmanship put into it and the final product shows that. A complete work of love. 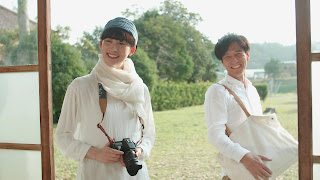 Tadashi Nagayama certainly is proving to be one of the most original voices working in Japan today. Only two features in and he has a style and humor all his own. Whatever he does next, I'll be sure to be there and in a much more timely manner. Being Natural is one of the weirdest movies you'll see this year and it certainly will find quite the crowd in due time. Just the right amount of heartwarming and bloodletting.