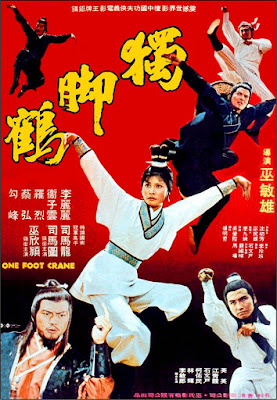 When it comes to kung fu films from the secondary level production companies, it can be a crap shoot on the quality of the material. For the most part, it’s best to rely on word of mouth from the martial arts cinema community to be guide to which ones are worth the time. One Foot Crane is one of those films that came highly recommended, for better or worse. In a lot of ways, this ambitious little film has a ton of great scenes and fantastic elements to it. The cast is brilliant, starting with Lily Li-Li as the titular woman hell bent on taking revenge on the four men that slaughtered her family, and it features a lot of recognizable faces beyond that including a brief, but fantastic role for the always reliable Lo Lieh. Beyond that, many of the fight sequences are well executed, although the finale could have been tightened up a bit to create a more intense punch, and there is plenty to love about the broad stroke characters that partake in them. There’s a scene early on where our heroine kicks a sword up out of the hand of a henchman, bends him over, and let’s the falling sword impale him in the back. When the film is on, it’s a spectacularly fun watch that lives up to the hype.

Unfortunately, the whole is not the sum of its parts in this case. One Foot Crane is a film that suffers from a narrative that’s a bit too thin and a dub that’s perhaps one of the worst I’ve ever seen. One of the strangest choices that it makes is sidelining its heroine for a large portion of the second act. She’s already proven to hold her own as a lead, but it tries to complicate it’s story with a mysterious wandering swordsman and a villain sent to kill her that starts having second thoughts. Both of the characters are martial arts staples, but the choice to add them at this point sort of derails the narrative as it’s building and seems to only make the overall themes of the film more muddy. However, the narrative structure and pacing issues are smaller ones overall, but it’s the dubbing that completely destroys any weight to the film that truly cripples it. In particular, One Foot Crane adds in a well deserved “romantic” subplot in the second half that adds a lot of depth to the main character and adds in two civilian characters (her suitor and his mother) that end up caught in the crossfire. It has a weird amount of heart, in concept, for a subplot added so late. Yet, the dubbing is so poor that any real heart or emotional core is lost in its poor execution. It’s almost baffling how it could undercut the film so much.

Beyond those two main issues, One Foot Crane is an entertaining little kung fu flick and it’s strong moments are worthy of the word of mouth it has generated over the years as an overlooked gem. The cast has presence, the action is mostly fun and exciting, and the formulaic story serves its purpose even with the flaws. One has to wonder if there is a version with the original audio track out there to see if the dub is truly as dubious as it comes off as. In the end though, this is the only version I found available to me and One Foot Crane ends up being a middle of the road flick. 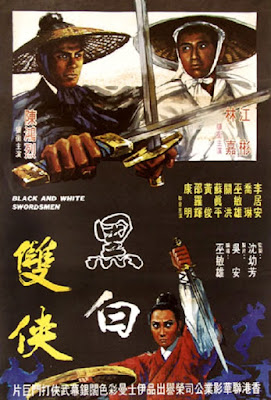 Wuxia films can be tricky to execute. Particularly by 1971, when a studio like Shaw Brothers had dominated the genre for so long with their style, branding, and budgets. However, there are still a handful of truly great wuxia films that were made by some of the smaller studios too. Despite it’s best efforts, Black and White Swordsmen is a film that falters quite a bit when it comes to getting to that upper echelon of the genre. Some of this is due to the poor version that exists now, thanks to some horrendous dubbing which, like the review for One Foot Crane above, neuters the dramatic heft of the film, but some of it is also part of just how ambitious this film is. In many ways, Black and White Swordsmen tries to be so epic, that it’s budgetary and artistic restraints cannot keep up and it feels like a mixed effort. It’s a film that garners an ‘A’ for effort, but a ‘C’ for execution.

Black and White Swordsmen attempts to craft a layered and dramatically dynamic film. There is a lot of different characters, rival families, romantic subplots, and plenty of other wuxia tropes for martial arts fans to enjoy. The villain is introduced almost immediately as the titular black swordsman, with a performance that reigns supreme in the film itself, and the rest of the film introduces characters and plotting that swirls around that cornerstone. The narrative, unfortunately, has trouble keeping things clear and concise as it introduces its ensemble and it’s the first part of why the film ends up as disappointing as it desperately attempts to pile drive its epic tale.  Outside of the eye rolling and problematic dubbing (and thus dialogue,) one can sense that there are great performances from the ensemble though. Many of the leads deliver, what one could assume without the dub, some strong moments and when they are needed they ably leap into the action sequences. Director Wu Min-Hsiung once again struggles a bit in getting the tonal shifts to work for him, but here he does embrace the fantasy elements of the wuxia with some fun moments for the characters. In particular, a sword fight on the side of a cliff, with the two combatants fighting parallel to the ground, stands out as does a fun classic wuxia moment where our female swordswoman throws some shade (and deadly cups) at some hecklers.

While the results for Black and White Swordsmen is more mediocre than anything else, there are glimpses of the film that might have been that makes the film feel bigger than the sum of its parts. It might seem as though it fits right in with the regular wuxia tropes, but there is an ambitiousness to the scope and approach that defies the budget and artistic restraints of its execution. Like the previously mentioned One Foot Crane, it’s easy to see why this film has pulled a rather devoted cult audience over time (not as big as Crane, but still) even if the results are less than stellar. With a strong B-cast, some memorable action set pieces, and a great villain, Black and White Swordsmen works to a certain degree. Keep a grain of salt with you and enjoy it for what it is.