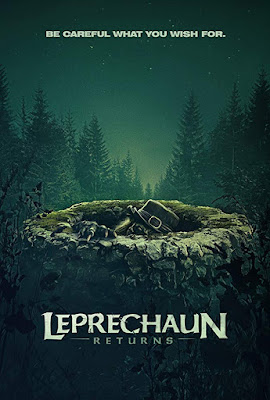 To properly address Leprechaun Returns, we need to start by having a brief conversation about the Leprechaun franchise thus far. After the first film came out with a bang, utilizing the emerging direct to home video market and developing a video store cult audience, the series has seen its relative ups and downs. This is a franchise that was never meant to be taken seriously. The tongue is very, very firmly planted in cheek from the onset. Whether or not you are willing to ride the series through its waning issues of quality and over reliance on gimmick is more or less a question of how far you are willing to accept ridiculousness and horrific puns. When the series suffered a reboot back in 2014 with Leprechaun: Origins, it was a wild mistake and wholly misguided venture that left most people, even those who enjoyed the series, myself included, perplexed. Did we ask for a super serious, dark, and modernized manipulation that forgot everything that was core to series?

Fast forward to 2018 and now we have Leprechaun Returns. It’s a fitting title since, quite frankly, the intent of this film is to not only get the franchise back to what made it popular in the first place, but it’s going the route of ignoring most of the series in favor of creating a direct sequel to the original video rental hero. Thus, it’s a return to form. In that manner, Leprechaun Returns is quite effective. The film focuses on the daughter of Jennifer Aniston’s heroine from the original, who sadly does not make a cameo in the film, as she joins a sorority to a local college in attempting to make the old house from the original a self-functioning and “green” commune. Naturally, to do so they need to use the well that is the resting place of the rhyming and creepy leprechaun and… I’m sure you can see how this ends up.

Like most of the Leprechaun films…excuse me, all of the Leprechaun films, Returns is not one that is meant to invoke a lot of artistic merit. Director Steven Kostanski, most widely known for the insane cult film The Void, knows this and embraces everything about the original handful of Leprechaun films while completely running with it. This film is littered with broad stroke and eye-rolling caricatures (hardly characters) and there is an obvious sense that the film has little intent in crafting any larger narrative outside of the standard horror structure. We get lots of silly people doing silly things being killed in silly ways.

Returns instead focuses on delivering the things we expect from a Leprechaun film: inventive kills done with deliriously entertaining practical effects, terrible rhymes from the villain that often utilizes one liners and puns, and inconsistent but hilariously fun fantasy driven horror. This series was made popular on those things and Returns delivers it in spades. The film has a creative whimsy to them that it was hard to wipe the stupid grin from my face for the whole run time. There are a handful of kills that are spectacular, just hold your breath for the sprinkler one, done with a love for old school practical gore effects, the plot is just plain dumb with rapid fire jokes galore about the inconsistent plot and characters, and the director intends to show his love for comedy horror in a few key homages – including a very upfront sequence meant to invoke Army of Darkness. It’s obvious that the makers of this film had a love for the series and it’s evident in how they approach the material. They even went as far as to get Mark Holton back to reprise his role as Ozzie, which surprisingly ends up being the best part of the film.

If you know anything about the Leprechaun series, you already know whether or not this film is going to work for you. It’s hardly anything new to the series and it damn sure isn’t any kind of artistic horror that is going to invite a lot of new folks to see the franchise, but Leprechaun Returns is blissfully aware of what it is and why fans love these films. It plays up all of its strengths, addresses its weaknesses with humor, and delivers on an old school horror approach that does what it was supposed to do: give fans a reason to return. In that way, Leprechaun Returns is easily one of my favorites of the year. It’s not a good film in the classical film critique sense, but it’s also just what I wanted/needed from it.