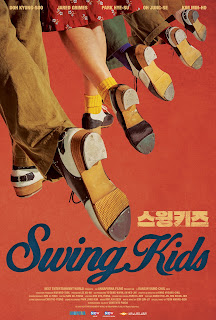 Set during wartime and taking place in a prison camp, Swing Kids decides to shake things up within the war genre confines by bringing life to the very real depressing times of the era by injecting life into the scene by way of tapdance and song. Does it work? Given that director Kang is at the helm, the answer is a confident yes.

There admittedly isn't a lot going on with the plot. It's things you'd expect given the setting but what we do get is a plethora of memorable and completely entertaining characters set to burrow their way into your heart. From the cocky but relatable lead, played extraordinarily by D.O of E-XO fame, to an overweight Chinese immigrant who is probably my favorite of the many side additions. 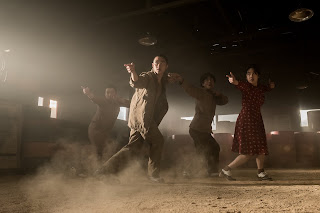 Clearly when going into a movie like this, one is there to see the dance moves on display and there is no shortage of song and dance here. Many classics from the era, both Korean and around the world are played here and admittedly I didn't know most of the songs, but that said, it grooves and gets you amped up the way a good dance movie should. I really wanted to go out and get my own tap shoes the moment the credits began rolling. Gared Grimes, a very renown tapdancer, just stole every moment here, both in terms of dancing and acting. A pleasant surprise. To further add to that surprise is the fact that all the English-speaking actors were great, perhaps a first for Korean cinema.

A possible turnoff and a bit of an annoyance to my viewing experience was how dark the film veered at times. Sure, it is war and the horrors of it can be felt, but I think the shocking, although completely effective outbursts of graphic violence and showing it very much like it is may hinder how wide of an audience this otherwise delightful and very light-hearted film extends to. Something like this should be enjoyed by the whole family but is most certainly not a child friendly feature given these hard to watch moments.


At the end of the day, Kang Hyeong-chul has once more reaffirmed himself as Korea's leading comedic director. He crafts brilliantly unique laugh fests with just the right amount of heartstring tugging drama and an over abundance of visual flair, making him one of the absolutel best. If you see one movie this holiday season to get you pumped, make it Swing Kids.

P.S. Name a movie with more impressive editing this year? I didn't think so.