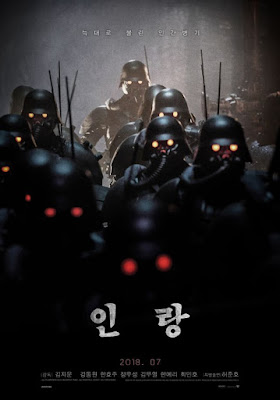 For the record, I’m not all that familiar for the source material behind Kim Jee-woon’s adaption of what is highly considered a classic piece of modern culture. Perhaps he does a lot of unique things with it, spinning its core ideas and messages in fresh ways that inspire confidence in fans. I couldn’t tell you otherwise. Or, maybe, Illang: The Wolf Brigade falls short and comes off as a film that stumbles in reaching its lofty goals as a futuristic action flick with its social and political messaging. For my money, despite some great elements, Illang falls into the latter. Judging the film on its own merits, of course.

The film’s stumbling is not for a lack of effort. In a lot of ways, Illang is a slamming entertainment ride worthy of the watch. In particular, the film’s opening sequence and first act promises plenty of stylish action set pieces, complex characters, and almost satirical approaches to its vision of a militant future. At its best, it could have been South Korea’s modern spin on the messages and genre blending of Robocop. However, as the film progresses it only tends to roll into more consumable and predictable valleys and by the time it finds its way into the third act it feels more akin to the usual, formulaic anti-hero, pseudo-romantic action thriller that South Korean cinema is known for. This isn’t necessarily a bad thing. Kim Jee-woon is perfectly able to execute this with a vigor in brutally effective and entertaining ways. The performances are decent, the action is full of hard-hitting thrills, and there are key moments where the concept pays off in dividends, including a one versus many battle in the sewers for the third act that’s edge of your seat fun. The problem is that Illang never quite reaches the heights it might have with the concepts and talent behind it and it ultimately succumbs to its own popcorn and mainstream appealing intentions. Fun, entertaining, but a bit too by the numbers and predictable for its own good. 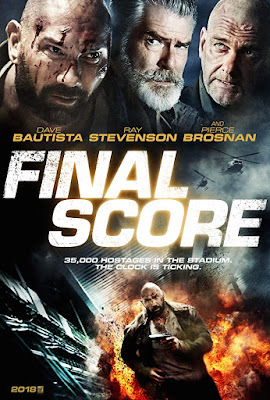 Back in the 90’s, Van Damme did this little action classic called Sudden Death. Most of the people reading this have probably heard of the film, if not seen it. It’s quite enjoyable and it was often referred to as Die Hard in a hockey stadium by fans and critics alike. Not unusual for the time since that was a popular phrase and comparison to use, but it’s one that has since faded a bit from the mainstream conscience. The reason I bring this up is that Final Score could benefit from a similar comparison. This time, however, it should be Sudden Death in a soccer (football) stadium. In essence, that’s the core of the film. Update some of the concepts with modern social fears, like xenophobia and foreign civil unrest for plotting foundations and commentary, and throw in a current action star like Dave Bautista and voila…it’s Final Score.

The execution of the film is a bit more mixed, mostly due to the predictable nature of its narrative and plot as a hero must thwart terrorists in the stadium, help the authorities on the outside, and save his niece in the process, but the film never pretends to be anything more than that. This is most evident in the humorous nervous side kick, impeccably evil big bad (played intensely by Stevenson,) and the general lack of focus on anything overly logical or realistic. Does it make sense that there would be a motorcycle chase through the hallways around the seating of a sports arena that ends up on the roof with our hero jumping his vehicle onto a lower roof? Absolutely not. However, it is really fun and the ham-fisted execution allows the audience to run with it. If anything, the big thing that Final Score proves is that Dave Bautista needs to have his own action franchise that isn’t an ensemble or secondary role. Hell, I would be okay if they franchised his character in this one. If Final Score had some better editing, which undermines some of the action including the high expectations I had for Bautista’s fight with The Nightmare (Martyn Ford) in this, and more effective secondary plots, then it might have been one of the better action films of the year. As is, Final Score is a great little gem that deserves a bit more attention than it got as a direct to home video release.