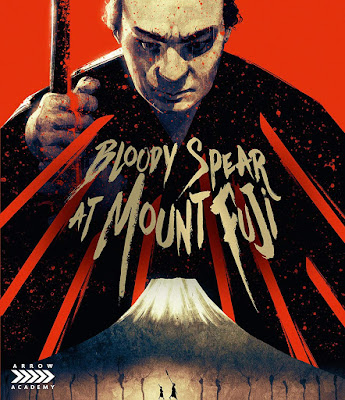 The Arrow Academy label, which covers the arthouse titles for the more cult focused Arrow Video, is not a label that we cover in full here at Blood Brothers. Occasionally they drop something of interest that ends up on our reviewing queue. Most recently, they released the 1955 Japanese film, Bloody Spear at Mount Fuji. Intriguingly enough, despite its fantastic new art on this Blu Ray release, the visceral title, and plenty of other indicators (like the original poster,) Bloody Spear at Mount Fuji is not an action film. Going into the film, I certainly had expectations that it would be an old school action film, perhaps, similar to some of the material that Criterion has put out from this same era, but that is not the case. This film is more fittingly a dramatic comedy or a comedic drama, depending on the scene. In these regards though, the film is actually a masterpiece in tonal balance, utilizing its road trip narrative to deliver some fantastic satire, tragedy, and its own oddities of storytelling. This may not be the brimming tense and action packed film the title would make an audience assume, but, quite frankly, it’s a brilliant film in its own way.

In many ways, Bloody Spear at Mount Fuji is a film about commentaries. Not only does the film feature heavily a commentary on social hierarchies and inherent flaws of them, told as a satire of the Edo Period social class levels, but in a lot of ways it completely undermines the classic chanbara formula that was being established in cinema of the time – which would only gather in momentum through the 1970s. It does this by making our main protagonist the spear carrying servant of a higher ranked master as they travel on the road to their destination. Along the way they encounter a variety of different people in different situations and they have to navigate pitfalls and strange obstacles to keep on their way.

Being told from the main perspective of the spear carrier, Genpachi, gives the film an interesting angle. Namely, he’s fully devoted to his master, who is played as a very understanding and pleasing character that occasionally feeds into his own status and ego when he drinks, but immediately the film sets up that hierarchy is going to be a main thematic commentary here. The servant talks highly of his own role, particularly when a young boy randomly joins their caravan and connects with Genpachi, and his love and devotion to his place in the system is clearly drawn out. Yet, as the film progresses, it repeatedly showcases the problems of this belief system through the characters they meet and the situations they arrive in. The master and his spear carrier accidentally catch a renowned thief and when the master tries to dispute it, he’s still given all the credit, for example. Another set piece features a group of political figures that decide to have a tea ceremony on the side of the road in the view of Mount Fuji which prevents all of the workers and regular folks from using it and causing a massive traffic jam as they wait for them to finish their tea. This kind of comedic series of events, which often is undermined by characters that are rebounding from tragic events or poor choices, gives the film a significant amount of satire tonality. This is a film that repeatedly pokes fun at the system and its upper classes (even when the upper classes are presented as kind in the case of the master) and does it in a way that truly evokes some clever writing and fantastic character development.

Naturally, the consistently winding narrative of being a road film allows Bloody Spear at Mount Fuji to deliver on a variety of situations. Each of the group’s encounters adds a layer to the commentary and narrative, but it’s the execution of the film that allows it to feel like a smooth trip. Although the director, Tomu Uchida, certainly has a brilliant knack for injecting the subtext and messages into what could easily still play as a road comedy on the surface, he never attempts to do anything too wild visually to pull away from it. Most of the reveals, via camera zoom or editing, are done for mostly emotional effect and it works to drive home the point of the film. If anything, his only truly stylish approach to the film comes in the third act when the one sequence of true action comes to light and how the film handles the consequences of that action, but to give much more away would betray the experience. The performances of the various players are also key to its success. There is a natural tone and feel to the dialogue and how its delivered, so that every new set of characters that is introduced on the road feels like a natural progression of the story and for the characters. The film, however, is anchored by Kataoka as Genpachi. He not only acts as the bridge for the audience into the loftier narrative, but his ability to go through all of the emotions of his journey is very much the reason for all of the films humanity and heart. Bloody Spear at Mount Fuji would no work if his performance wasn’t this good.

As expected, not only is the film a fantastic addition to the Arrow Academy catalog (and any fan of Japanese cinema) but this latest Blu Ray looks great. It may not be the best restoration I’ve seen from Arrow, but considering the source material, it still looks damn near impeccable and the extra features are worth it too. Once again, Jasper Sharp brings his pristine expertise to the table with his commentary on the film, adding in in a world’s worth of context to further allow fans to enjoy the film, and there’s a slick booklet that further adds a lot of content. In terms of the volume of features, this is hardly as packed as some of the other Arrow release, but the quality is still beyond impressive and for an overlooked film like this, anything and everything is welcome.

Although my expectations for the film were skewed by the title and cover artwork, Bloody Spear at Mount Fuji ended up being one of the great discoveries of the year. It’s a wonderfully fun piece of road comedy on the surface, powered by some great performances and a subtle sense of direction, but it’s depth as satire and the socio-political message film make it a surprisingly effective and thoughtful piece of cinema. One does have to wonder why this film hasn’t garnered more attention even now that it has been released, but hopefully it only gathers momentum from cinephiles as time goes on. Bloody Spear at Mount Fuji deserves it. 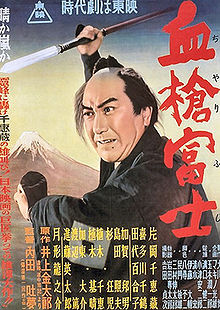