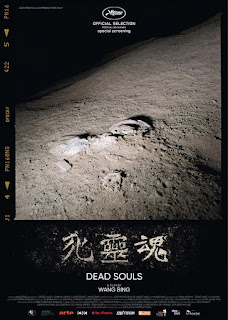 "Beneath this Earth, rests bones."

For 12 years, spanning 2005-2017, documentarian Wang Bing trekked throughout China, interviewing various survivors of the Communist Party's Anti-Rightist campaign of 1957, where 3,200 men deemed "rightists" were held captive and sent to re-education through labor camps, where only a mere 500 would survive. Some of these remaining men share the horrors of their harrowing experience in one of the most monumental documentaries ever created.

Clocking in at a colossal 495 minutes, Dead Souls is a large undertaking for any type of film lover. Some may be put off by this initially, but I can attest to the importance of its runtime. Even at over 8 hours, some of the interviewed victims have been cut from the final film. There are so many stories told here, none lesser or more important than the others. There is a balance presented here, and the interviews take as long as they need. These lives and confession are extremely important, their voices worth every second heard. I am so thankful a work like this can even exist. 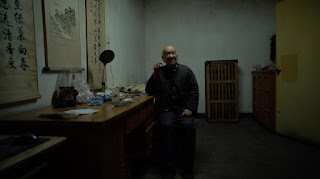 Most of the film cuts back and forth between 2005/2006 and 2016/2017. At times we hit a moment between the two but the bulk of it bounces around those timefames frequently. The video quality fluctuates due to the limitations of video equipment in the earlier years, but the aesthetic is never meant for flash. It maintains a camera that never intrudes or demands, but one that follows and let's the subject be the weight as it most certainly should be in this case. I admire the moments the director's arm slips into frame or his reflection is seen in a mirror hanging on a closet door as he peers through the viewfinder of his camera. It is as raw as it can get and nothing is shyed away from if it intervenes with the moment being captured or story being told. There are cuts but only presented in necessary moments, such as a person exiting the room for a break or of the interview is to be carried on the next day.

There is no use of score and to powerful effect. The emotional weight and resonance felt merely needs presented by those on camera. As said before, the visuals aren't really a highlight, by way of design, but the shots where the camera travels through the desert in more current times, over the camps, haunting abruptly to examine skeletal remains poking up out of the ground, before moving on only a few steps to the next pileof scattered bones. Haunting is an understatement. In addition to the more traditionally shot interview, moments like these or a hard cut to a note written by one of the deceased, there is just enough variety to a standard style of visual presentation to keep things fresh throughout. 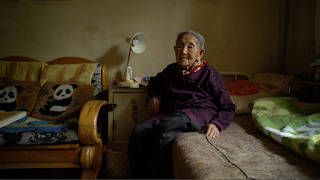 Sitting through 8+ hours of listening to these elderly men reflect back on the inhumane hardships they endured; the starvation, beatings, cannibalism and death they were surrounded with every waking moment, it's a wonder that any survived. Saddened and shocked in equal measure, the things humans put one another through never ceases to disturb me. These voices needed to be heard. Wang Bing was the perfect vessel to let these stories be told. May their souls rest in peace. A dark corner of history that had been told in an uncensored fashion. Easily one the most important pieces of cinema to surface in 2018.