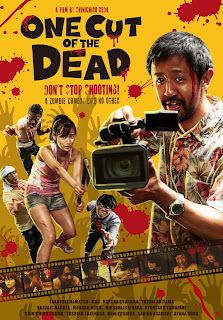 Struggling to get one of his main actresses in character during a film shoot, director Higurashi (Takayuki Hamatsu) snaps and storms off stage after an abundant amount of takes. We follow the crew during an unplanned break as the director trys to cool down and the actress tries to focus on her performance. In the midst of this behind the scenes meltdown, one of the extras in their zombie movie get up seems to be a little more than well made up and what ensues is a chaotic bloodbath of zombie action that unfolds in real time in one long unbroken 45 minute or so take, immediately stunning the audience from frame one.

One Cut of the Dead is easily the most exciting genre film of the year and an indie film rock star in its native Japan, raking in over 2000 times it's roughly micro $27,000 budget, opening on a mere two screens and with no money spent on an advertisement campaign. I am never one to even bring up box office, especially in a review, but it's an extremely impressive feat, regardless on your stance with the film. That said, I think One Cut is the unexpected cult film of 2018. The one that quickly snuck up and leapt to the top of the throne, standing firmly amongst the best midnight classics. The Shaun of the Dead of the 2010s if you will.

Characters are one of the many highlights of this zombie laugh fest. The angry director who keeps cropping up and yelling "Action!" as he shoves his camera into the fearful faces of his performers who have stopped acting and started attempting to survive. He keeps the chaos alive and well. Another fun character is the make-up artist, played to perfection by Harumi Shuhama, who is the one in these types of movie who practices self-defense as a hobby which conveniently and hilariously plays into the oncoming zombie attack. Pom!

The way the story unfolds and how the narrative is a play on structure, is surprising, and very refreshing. From an impressive technical and gory one-take that will impress every type of movie goer, to a shift towards a more conventional form of storytelling and overall tonal shift that completely works, One Cut manages to surprise at almost every turn. Little things that raise questions or seem accidental upon initial reveal are all handled and accounted for as things play out. On multiple occasions, I found myself envious with the choices being made, wishing I had come up with something similar myself.

I could go on extensively with praise and covering every angle of this movie, but there  is a simple way to pump the breaks and wrap things up here. One Cut of the Dead is a hilarious, bloody romp with enough heart to make any genre fan blush. It's easy to see why it's been such a huge success. Very hard not to fall in love with a little film as charming as this one. Wherever Shinichiro Ueda decides to head next, I hope it has even just a fraction of the passion on display here. The most fun I've had with a movie all year!