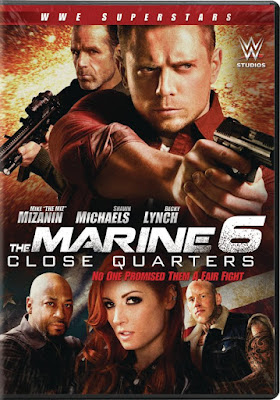 The Marine series has two things going for it that make me come back to it again and again. Firstly, it’s old school grounded and cheesy B-action. Secondly, it’s a franchise. I’m a sad sucker for both of those things. Even though I have never been a WWE fan, WWE Films has been doing some decent stuff on the straight to home video action market and I have no reason not to support them in their endeavors. Although The Marine franchise started off on a rocky road, requiring three different stars as three different characters in the first three films to mixed results, the series has strangely gotten better as it has gone on. Although The Marine 5 was met by mixed reactions from fans, it was easily one of my favorites thanks to its tongue-in-cheek attitude and solid direction from B-movie action director James Nunn. The Marine 6: Close Quarters does the smart thing and brings back The Miz’s Jake Carter for another round of beatdowns and bullet dodges along with Nunn in the director’s chair. While the results of this film are a bit less entertaining than the last for me, The Marine 6 brings another healthy dose of cheesy action to its fans and it’s another fun entry into this surprisingly enjoyable franchise.

This time around Jake Carter, once again played with the hammy wink-wink attitude of The Miz, ends up stumbling into an international terrorist plot to kidnap a young woman in an old abandoned warehouse in Oregon. Sounds mundane? Well, this time he has his old Marine pal Trapper, played by the gruff and weirdly comedic Shawn Michaels, to tag along for the ride and the two of them end up squaring off against these kidnappers to save the girl. Truthfully, the plot in this film is hardly original and outside of one brilliant narrative spin that will have franchise fans in a tizzy during the third act, it’s the weakest part of The Marine 6. Even compared to the last two, which both very much adhered to action formulas and stereotypes, this one feels very by-the-numbers. Most of the film is problematically predictable and it rarely steps outside of its comfort zone to deliver fresh feeling thrills as it plays its straight forward story. Most of the villains are underdeveloped, as is the secondary plot of why they kidnap the girl in the first place, and there is definitely some room for improvement in those regards to great a more layered cinematic experience.

Then again, this is a fuckin’ movie called The Marine 6 that features WWE stars beating each other up and just leaping from one action set piece to the next one. I’m not sure fans are exactly looking for an in-depth analysis of the justice system or veteran’s affairs, although both are used sparingly to give some meaning to the film. This is a raucous old school action film meant to entertain first, entertain second, and if there’s time, maybe throw in some charming comradery between its two heroes. In these regards, The Marine 6 does not disappoint. James Nunn further proves himself as one of the best directors working in action currently with his knack for great timing, dynamic set pieces, and entertaining (if not occasionally dramatic) key moments. He has an old school approach to character and scene development and while the overall film might disappoint in storytelling, it’s just fun to watch these two heroes jump into the fray and kick some ass. Both The Miz and Michaels have a fun chemistry onscreen, although their bantering could have been turned up a notch or two, and the evil villains are broad stroke characters that act more like speed bumps than anything. WWE star Rebecca ‘Becky Lynn’ Quin gets to deliver some badass moments as the big bad of the film and the always reliable Martyn Ford (from Undisputed 4 and Final Score action fame) gets two great little battles with The Miz for action fans to enjoy.

Although The Marine 6: Close Quarters does seem like a slight step back from the sheer strange entertainment of the previous entry, the combination of James Nunn’s continued action direction excellence with another round of The Miz and his new partner Shawn Michaels makes this entry another rollicking piece of entertainment. It has some great energy, fun set pieces, and a knack for playing up those key moments to keep the audience invested even when it is just seemingly running through the tropes. Naturally, if you’re not a B-action fan or a fan of WWE, go into The Marine 6 with a grain of salt. For those that are fans of either of those things, please, pick up this film and make sure that this enjoyable franchise never ends.

Although the ending leaves a lot of questions open, I cannot wait for The Marine 7.