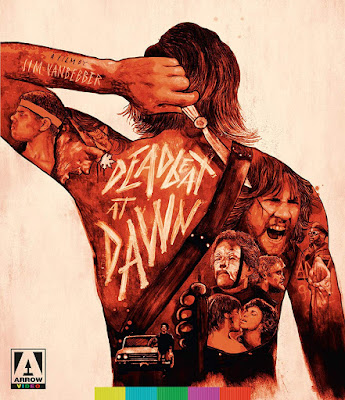 Diving into the new Blu Ray release of Deadbeat at Dawn from Arrow Video was something for an adventure for me. Mainly, I had never even heard of the film prior to its announcement by the cult cinema releasing label. When it was announced, my initial reaction was to not do any research on the film prior to seeing it and go in completely blind. It’s not often that I am able to do that with films – particularly those released by a larger label – so even the idea of a fresh experience was somewhat exciting. Intriguingly enough, what I found with Deadbeat at Dawn was the epitome of a DIY film that looked like it was made for $200 and a bottle of whiskey. Even with its incredibly raw and rough around the edges approach, it’s easy to see why the film has garnered a cult audience with its almost punk-like approach and energetic appeal to low budget cinema. This isn’t a film that reaches too far above its means, like The Driller Killer or something of that ilk, but it is a film that has plenty of admirable qualities that generally even out its rough patches.

On the surface, Deadbeat at Dawn is a fairly by the numbers action thriller. Our hero, the leader of a small, but very ambitious gang, is in the middle of a crisis. On one hand, he wants to give up his ragged life as a street thug to settle down with girlfriend, but on the other hand, he has no idea what a real life even looks like. Needless to say, you can try to take the punk out of the streets, but the streets will never leave the punk and crazy shit goes down as a rival gang refuses to let him out.

If there is a feeling and tone that immediately consumes what Deadbeat at Dawn has to offer, it’s the can-do attitude it offers. This permeating off the cuff feel to the entire film is appropriately paralleled by the anarchistic and raw nature of the lead character Goose, played by Jim Van Bebber (who also serves as the film’s writer, director, producer, and God knows what else) and his own punk, anti-systematic attitude. Even more fitting is that the film also seemingly wants to do everything “right” by its viewer in terms of cinema, similar to how the Goose attempts to fix things and make them right by his girlfriend for a large majority of the film. It’s this synchronicity that inspires a lot of the best parts. The spiraling depression of the second act that forces Goose to briefly attempt at connecting with his own deadbeat father or the plan he concocts when he is forced back into the gangs to perform ‘one last score.’ Despite its obvious flaws, more on those in a second, the film inherently never stops moving and its intentions as a piece of low budget DIY cinema has to be respected in that manner. Fans of the raw tone of 70s and 80s low budget exploitation or action will find plenty to love in the sheer heart of what this film has to offer.

That being said, Deadbeat at Dawn does occasionally feel very amateurish in its execution, which is to be expected with the proper context. Van Bebber, for all of the raw energy he brings to his multiple roles, does not have the nuance and knack for pulling off some of the more ambitious elements of the film. Par for the course for a gentleman that took his student loans meant for film school and funneled them in this feature. There are moments where one can see some of his strengths in a variety of ways, there is some great surrealism sprinkled into the second act and there is some surprising quality to the tension of the finale act as his own plan starts to spiral out of control, but for every moment that works there are just as many that feel terribly underdeveloped. His relationship with his girlfriend isn’t developed nearly enough and for a film where themes arise about the chaos of undisciplined and reckless egos unleased on the streets of Dayton, Ohio, there sure is a strange amount of nunchucks and martials involved in the action. The limited budget just hinders plenty of the larger ideas, including the heist sequence or, in general, most of the acting performances, and in those regards this film will never extend beyond the realms of cult cinema appreciation.

In terms of cult cinema though, it’s not a massive reach to understand why this has garnered its audience. It’s underground, raw, and the spirit of the DIY film shines brilliantly. It’s almost oddly against the nature of the film for it to have a new 2K restoration by Arrow Films (although it was supervised by Van Bebber) even though what they have seemingly done with the film looks like a miracle, even if it still feels raw. The inclusion of the INSANE number of features (listed below) also lends well to the film’s stature in the cult spectrum. New audio commentaries, documentaries, music videos, and a slew of Van Bebber’s short films – also restored – make this a release that takes quite some time to actually dig into for fans.

Deadbeat at Dawn is one of those low budget genre films that has found its very dedicated and intense cult audience over the years and this latest Arrow Video release of it ought to have them in the streets burning mattresses. The film lacks a lot of finesse with its material, succumbing to its budgetary restraints and amateurish execution, but the impressive heart and raw energy that it exudes is truly something that cult cinema fans will feed into as a group and, for that, Deadbeat at Dawn does receive a recommendation. Just not for everyone. 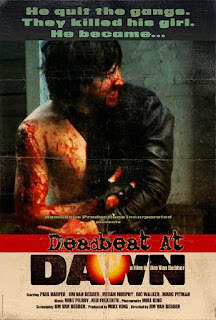