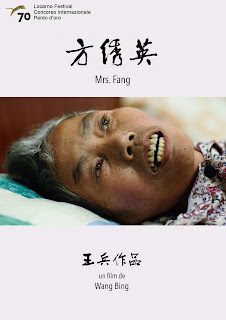 Mrs. Fang is 68 years old and has an advanced form of Alzheimer's disease, and she is bedridden, accompanied with care and watched over by her daughter and son. Various family members and friends pop in and out on her, closely observing her last ten days of existence on this Earth. Death is inescapable and Wang Bing's examination of the final stage in life simply has no padding. For better or for worse, we see this woman lay through her final days and then fade into what ever lays beyond. It is a tough watch and will leave many a viewer divided.

I don't think there is much to really spoil here as there is no way to not know how things will turn out, but the way in which the film transitions into observation of Mrs. Fang's deteriorating health is abrupt and shocking. Things happen in life unexpectedly and a hard cut mere minutes into the documentary greatly reflect the cold possibilities that life may throw one's way. The Alzheimer's was there for some time, although the specifics are unknown, and at just the snap of a finger, only some months later, she is on her back, skin tightened and drawn in, her teeth protruding from her mouth indefinitely, appearing much thinner than before and it isn't known whether she is aware of much of anything going on around her or not at this point.

This is my first full experience with documentarian Wang Bing, the only partial endeavor being a wonderful yet incomplete viewing of the director's 9 hour Tie Xi Qu: West of the Tracks. I must say, I was thoroughly impressed with the stripped back minimalistic nature of the presentation. The takes are long and unbroken, the editing thus being sparse, and the juxtaposition between the locals fishing and living out there daily lives and the extremely close-up shots of the suffering Mrs. Fang are incredibly haunting and always effective.

At times I struggled to watch what was being and even wondered why this needed to be documented. It is such a natural part of existence and humanity, but it is hard to accept that reality, even when it is someone you don't know in the slightest. All we learn about her in the span of this documentary is that she is married and has a family. Nothing more, not even snippets of her past comes to the forefront, save a brief story or two being told by her surrounding family and friends. Even then, her background is essentially cut from the film and it strengthens it. Every human life departing is just as important as another. We all suffer and go in the same manner. It's simple, but honest and that is what is admirable about Mrs. Fang the most... its almost suffocating honesty. 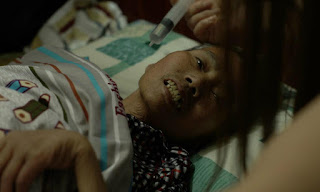 I am most certain to not revisit this piece of work anytime soon, not because lack of being impressed, but the image of suffering has been ingrained deep in my mind and with something like this I must keep some distance from it for health purposes. I do highly recommend it, though I see it being a no go for some. Hard to really find a mood for something like this, but for those wanting to have their mind working in ways unexpected and their heart pulled at, Mrs. Fang is up for the task. A blunt look at life's final moments, unflinching.