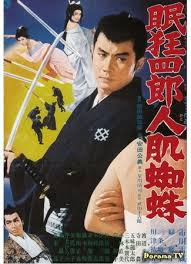 Going into the eleventh entry of the Sleepy Eyes of Death franchise, it was hard not to hope that the series could rebound a little bit from the previous two entries, which, while entertaining, were subpar overall. Perhaps it was the low expectations from the last two entries that allowed me to enjoy what Sleepy Eyes of Death 11: In the Spider’s Lair had to offer, but the film was quite fun and entertaining. This entry into the chanbara series pulls back and simplifies its story and narrative even further and instead of trying to find a balance of approaches, it aims to entertain and provide a consumable and gimmick filled Kyoshiro adventure first and foremost. I’m not saying that In the Spider’s Lair is the best of the series, hardly, but it’s silly streamlined focus on adventurous entertainment certainly hit a sweet spot for me.

Intriguingly enough, In the Spider’s Lair starts off indicating that it will dig deeper into the lore surrounding Kyoshiro, played once again by the stoic and intense Raizo Ichikawa. The story starts by having the wandering anti-samurai returning back to his home village for the first time since he was a teen to pay respects to his mother's grave. There he finds that an evil brother and sister duo on the run have taken up the leadership roles of the village and have been, well, up to no good. The film adds a bit of depth to Kyoshiro’s character, adding in some backstory about how he is the son of a black mass ritual of evil Satanists and gives a bit of time line to his life. Don’t worry, like most of the rest of the series, the details seem inconsistent and there is a sense that perhaps not all of it is true and that he just feeds into his own legend. While the film starts off indicating that it might leap back into the evil cult plot lines that have sporadically popped up, it more or less exists to just give the character an investment in a young man (also born of the black mass) and get Kyoshiro involved with the two villains of the plot.

This is all introduced in the opening minutes of the first act, notable because the film only runs a wickedly fast 80 minutes total, and pretty soon In the Spider's Lair sheds the layers for a more traditional formula of chanbara action. The stage is set. It’s Kyoshiro versus the brother and sister duo (the sister being the manipulative “spider” of the title that weaves a web to trap and kill the anti-hero) and the body count is going to be get high as Kyoshiro is, once again, the lesser evil forced to confront a greater evil. Director Kimiyoshi Yasuda, returning to the series again, directs the hell out of this one and uplifts what could have been a severely lacking script. It also helps that he truly embraces the gimmicky tones and allows the characters and key entertaining scenes to thrive in the moment. The performances from the secondary cast, particularly the two villains, adds to the sheer spectacle of it all and it creates some fascinating chemistry as the two sides duel with both snide remarks and sword clashing action. 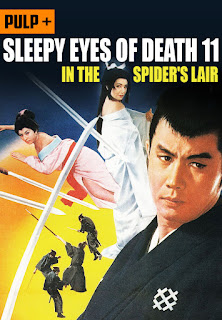 This does lead us to one of the better elements of In the Spider’s Lair which happens to be the action. Although often enough there’s plenty of gimmicks in the proceedings, including more traps lead by seduction and surprise hordes of lackey’s with little in terms of sword skills to match Kyoshiro's Full Moon Cut (which only makes one appearance in the film), Kimiyoshi shoots it all with a knack for visuals and pacing. It’s not wall to wall action, but even by this series' standard, there’s quite a few sequences and the way it’s placed and how it fits into the narrative works to create one of the more entertaining entries into the franchise. In particular, the film does not let up from leaning into the darker places that this series likes to fringe on and Kyoshiro remains on of the most vicious protagonists one is likely to encounter in cinema.

In general, Sleepy Eyes of Death 11: In the Spider’s Lair is not a great film. It doesn’t have a lot of depth and it teases a lot of character elements and subplots that it has no intent on expanding or layering into the main narrative. However, even though this can be problematic, the entertaining focus and trimmed approach to the narrative only benefits it as a piece of fist pumping chanbara fun. The evil vs evil concept works, the direction is effective, and the action crisp. By the time the film ends, fans will not be disappointed.