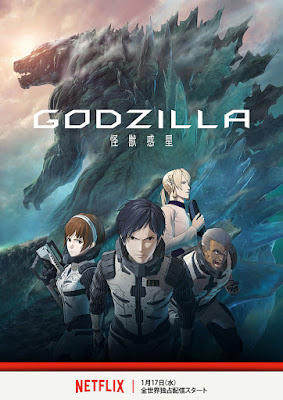 When Toho Animation announced that its next Godzilla feature would be an anime, it was easy to see how that would appeal to people. As the months rolled on, the information about this anime, titled Godzilla: Planet of the Monsters, didn’t necessarily seem to coincide with what I associate with a Godzilla film. Namely, the film was a post apocalyptic space film where the plot focused on humans returning to Earth after abandoning it thousands of years previous because of Godzilla’s presence. Other information certainly made me cautious and as time wore on I found my expectations for the film plummeting to the point where I almost had no desire to watch the actual film when it was finally unleashed as a Netflix original just recently.

Still, I’m a Godzilla fanboy and so I pulled myself up by my bootstraps and prepared for Godzilla: Planet of the Monsters.

The film, in all of its self-entitled arrogance, is ambitious. The story is completely out there and it requires so much exposition that it’s almost mind boggling. Instead of just introducing a Godzilla story in current times, it leaps thousands of years into the future, adds in an entire subplot about an alien species that tried to help humanity defeat Godzilla, and then presents an Earth this is completely different then what we usually associate with Earth. The last of the human race are running out of supplies and they need to head back to Earth and figure out a solution. It’s a sprint for its audience to even keep pace with all of the universe building it is piling on and the timeline itself is so confusing as it attempts to create this concept that on Earth it's been thousands of years, but for the people in space it has only been a couple decades (?). A part of me almost respects Godzilla: Planet of the Monsters in just how bat shit insane it really is. It’s that out there. If anything, it gets a pass in how different it is from even the usual Godzilla material.

However, in its ambitiousness, the film also is a complete failure. My brother and I, in our love for the Godzilla franchise, always make fun of it for what we refer to as “G-Science.” G-Science is when the series makes up some random scientific sounding mumbo-jumbo to try and justify its own ridiculousness. Godzilla: Planet of the Monsters is ONLY G-Science and it’s completely ungrounded from any kind of sanity. The film spends almost its entire hour and a half run time justifying its own weird science, from the religious aliens who are shoehorned into the plot needlessly to the obscure concepts of why Godzilla is indestructible, immortal, metal (?!), and has its own electromagnetic shielding (?!?!?!). This is just the tip of the iceberg. There are also metal dragons, metal plants, and a ton of plot teases to storylines that never come to fruition. I’m not even going to touch on the weird space society that is founded or why/what/how that works and, honestly, the film seems fine with not explaining that either.

Godzilla: Planet of the Monsters is so concerned with its own scientific vomit and outlandish obstacles that it pulls the ultimate science fiction sin: it forgets to actually create any characters worth watching. The struggle for the characters in this film is melodramatically intense and yet it feels completely disconnected from those connections because each character is just kind of a shadow of what a real person might be. Oh, our hero is a hot headed know it all, but that’s it. Nothing else. I guess there are some secondary characters we should give a shit about, but I’ll be damned if I can remember any of them outside of the alien priest. The film doesn’t build them up beyond the bare minimum that would be considered a foundation and focuses instead on developing dialogue that simply seems like techno-babble jargon.

Even if the plotting and character development weren’t complete trash, the rest of the film doesn’t fare much better. I’m no anime expert (far from it, really,) but I felt the animation was choppy and felt half developed. The color schemes are all mute and the opposite of energetic, particularly since it goes from the grays and blacks of space to the grays and blacks of a metal (seriously, what the hell) planet Earth. I’m pretty sure they throw in purple ship rockets and orange explosions for the sake of just giving an audience something else to look at. The voice acting is perhaps the best part of the film, again, I’m not an expert, but considering how little they are given to work with in terms of dialogue and character it’s almost a moot point.

Then, as if to add a rancid cherry on top, Godzilla: Planet of the Monsters ends on a ‘to be continued’ note. Personally, I find films that do this to be super irritating, but the fact of the matter remains that this one spent a lot of time not doing anything but belching out terrible G-Science for the first half and spends the second half just having people run around bombing Godzilla in poorly paced action sequences. There’s nothing that really makes me want to tune in for the next installment (it’s rumored to be a full trilogy) and even teasing a much bigger threat at the end and all of the obvious teases for a much more layered set of films in the future doesn’t inspire any kind of real dedication. Sure, I love that there is a tease for Mecha-Godzilla in the opening, but if that doesn’t come back around I am going to riot.

Maybe it’s because I’m not an anime fan that Godzilla: Planet of the Monsters did resonate at all with me. It seems ambitious enough and strange enough to be something unique to add to the decades long franchise, but everything in this film is a massive misfire. The script is a trash heap of jargon, the characters don’t create dedication to the large universe being built, and even the animation seems rushed and uninspired. If this is the first of a trilogy, which it would seem to be by the relentless teases and cliffhanger ending, I’m not sure I’m even sold on coming back for the second part.

Oh, who am I kidding? I’m too much of a Godzilla fan to ignore the next one. Let’s just hope it’s better than whatever this film is.