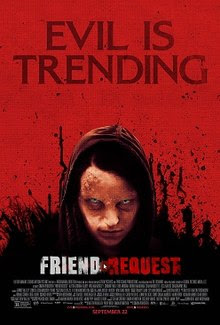 There was a span in the late 90s and early 00s that the J-Horror movement tapped into something unique, partnering a fear of technology with the social commentary and the traditional ghost stories that have been a staple of Japanese lore. To this day, films like Pulse, Ringu, and One Missed Call remain fascinating and impressive feats of combining social fears, artistic storytelling, and genre tropes. Recently, there has been a resurgence in attempting this same balance with modern horror films in the US. Movies like The Den, Unfriended, or Open Windows all take stabs at this balance with varying results. Friend Request, the latest film about the horrors of technology – in this case, social media – is just one more. Scratch that, it’s less than just one more. It is probably one the worst one I’ve seen yet. Instead of producing some kind of inspired commentary or even a stylistic choice to give itself an angle to rise above its peers, Friend Request just meanders through the motions and attempts to use the ‘Facebook’ platform concept as a gimmick to retelling the usual teen angst supernatural horror story. A story that doesn’t have a lot of depth or the teeth to sell it beyond the usual.

Perhaps the most problematic piece of Friend Request is that there are moments. Moments where a viewer can see that there might have been something more to this film than generic ghostly jump scares and amateur sleuthing to solve the haunting. There are some visuals, including a sequence with a character in a computer lab and flashing monitors or a subtle tension building mirror sequence, that indicate a director with a bit of style. There are also hints of a film that wants to build some commentary, particularly in how an online lifestyle reflects the wants and needs of someone’s real life beyond the things they post. Yet, throughout the film none of these things are consistent. Instead, Friend Request stumbles through the usual formulas, failing to build any real dynamics between the thin characters and lacking the artistry to add the layers hinted at in its asinine plotting. It’s poorly threaded story just rehashes some of the more successful films of the style and the weak mainstream jump scares fail to inspire any kind of palpable dread or fear. Even some of the decent performances or occasionally intriguing plot twist can’t save it from being unmemorable.

Friend Request may not be quite as disappointing as some of the horror films from the year, but even with low expectations it was not able to build and exceed those. It’s a film with moments of intriguing concept or a fun visual here and there. The rest is a fleeting and forgettable film that stumbles on its own ambitions and entertaining potential. The balance is off and the rest is a lot of wasted time. Stick to the classics. This is a Friend Request best left ignored.