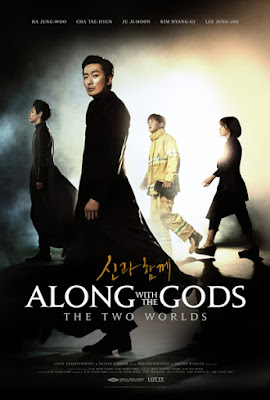 The initial trailers certainly intrigued me, but Along with the Gods: The Two Worlds was a film that existed as a huge question mark for me. On one hand, it appealed to the big scale fantasy adventure fan in me – the person that continually watches all of the CGI driven popcorn flicks that continually burst out of the Chinese film industry, and on the other hand, it appealed to me that it would contain the strong production values and execution that the South Korean market is known for. Could the two sides match up though? As the credits rolled on this epic film, after an almost two-and-a-half-hour runtime, I looked around at the audience in the theatrical showing we were attending. There was a wide variety of emotions. Patrons wiping tears from their eyes after the heart wrenching finale, giggles and excited talking about the action set pieces, and parents speaking with their kids about philosophical edge that the film used to drive its narrative. Along with the Gods: The Two Worlds is a film that resonates on a variety of levels. Not only does it manage to be a fun action adventure film, but it also works as an examination of the complexities of religious and philosophical viewpoints on a character living in a nuanced world.  It’s a film that occasionally has to warp through some of the more fascinating and subtle aspects of its script for the sake of bigger moments, but Along with the Gods represents a truly invigorating navigation of genre exploration and blockbuster style entertainment.

Many epic films of this nature, whether it be historically set or the fantasy powered ones, try to ease their audience into the universe that is being created. Perhaps an opening sequence of pizzazz or action to hook them, but then pulling it back to build into the development of characters and the world. Not Along with the Gods. It never hesitates to throw its audience right into story, only taking a brief moment to explain the idea that souls have to go through 7 trials in 49 days before they can be cleared for reincarnation, but the film immediately shows our main protagonist, a firefighter who sacrifices himself to save a child in a massive blaze, as he starts his journey through the trials. From there, almost immediately, the audience is introduced to his three defense “attorneys” who will be representing him for the trials. For a film with a robust runtime, the structure of the film up to and beyond this point, flies by and continually keeps a brisk pace. The narrative explores a lot of facets of the world that is being explored, unveiling smaller details as it goes, and it has to keep this pace as to not lose its audience in its layered story and genre bending sequences. Going through the trials with its various caricature-style judges and flashing back to look over our hero’s life the film has a lot of layers and it can be overwhelming, but the film handles it impressively nonetheless.

Occasionally, Along with the Gods feels like it rushes too much, leaving plenty of questions with the audience about the whats and whys for the various things that are being introduced or covered as the character Kim Ja-hong and his three guardians go through their journey to get him resurrected. With the epic nature of the script and the narrative approach though, Along with the Gods does a very admirable job at balancing it all to keep the audience entertained without deviating too much from its thoughtful themes and threading. Some of the characters, particularly in the fantastical realms of the film, feel brushed over a tad too much or the inclusion of monsters seems a bit out of the blue, but the film features enough intrigue, particularly through a murder mystery that presents itself in the second act, and enough charm with its characters that even when it is rushing that it is not deterring from the spectacle of the film.

However, no matter how intriguing the material or fascinating the philosophical questions that it raises with analyzing the human condition, the South Korean knack for strong production values and high-quality execution remains the most valuable part in selling the film. Whether it’s the CGI heavy chase sequence of the second act or the more explosive emotional purging of the final act, the film is immaculately crafted. Director Kim Yong-hwa digs out some impressive performances from his cast and navigates the leaps from personalized character moments to the action adventure sequences with nimble footing. Like most of the South Korean material that makes its way to the US, Along with the Gods impresses with its production values.

With its big budget visuals, charismatic performances, and ambitiously epic narrative, Along with the Gods: The Two Worlds is a film that appeals to a fairly diverse audience even with its strange combination of fantasy spectacle and character driven drama. It’s a film ripe with artistic layers and still manages to be blockbuster entertainment at the same time. Even with its slight flaws, Along with the Gods is one that’s not to miss.