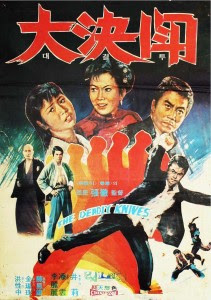 Perhaps one of the best and worst things about the Shaw Brothers catalog is that it is so impressively large. There are always films that go under the radar, for better or worse. I’ve seen well over 100 films now in my journey through the catalog and there are always surprises along the way. The latest surprise is The Deadly Knives. Going into the film, I had expectations that it would be a film along the lines of The Chinese Boxer or perhaps more geared towards the traditional early Bruce Lee picture, focusing on the anti-Japanese sentiments of its time period and promoting its heroic protagonist. Yet, the film takes some increasingly interesting moments within its more formulaic foundations and goes to some very dark places that were unexpected. It’s not the most memorable of the Shaw Brothers films from the era, but it’s one that has some impressive moments that add a lot of layering and depth to what might have been a throw away film.

Not having seen any other films from director Chang Il-ho made The Deadly Knives something of a wild card for my expectations and I have to admit I was impressed with some of the detailing and energy he brings to the fold in this one. While the basic story line, where a young man returns home to find that his father is in a dispute with a Japanese businessman over the forested land that he owns, is something of a generic story, Chang Il-ho adds in some intriguing parallels. The opening and closing shots of the film feature trees being chopped down and processed are one part of a theme that runs throughout the rest of the film. The Deadly Knives is a film about invaders raping and pillaging what is already there and it happens again and again in many sequences throughout the film as it focuses on how the Japanese did this with during the time period. Most brutally, the film uses this theme in a few sequences where the Japanese villain of the film forces himself on one of the leading female characters, played by Lily Li, driving her mad and scarring her. This is only one of the parallels that Chang Il-ho uses with this theme that adds a dark layering to the usual foray of the martial arts revenge picture and it adds a lot of depth to it.

The Deadly Knives has a lot of darkness as it goes though its plot though and by the time it reaches its second half, it’s filled with blood spurting violence, torture, and the previously mentioned brutality towards women. The Japanese characters are portrayed as almost cartoonishly evil while the heroes are presented with a bit more depth and complexity of character. The film starts off on a bright and light footing, focusing on our hero as a studied and talented individual caught in a love triangle who is eventually thrust into the heavier topics and violence of the second half of the film. He’s not the most interesting of lead characters and hits many of the tropes of the heroic son who must eventually take revenge and, despite a decent and subtle performance, is one of the bigger missteps of the film. Like the villains, he’s almost too perfect as a protagonist with his heroic deeds and good intentions. Still, thanks to some dynamic characters around him – including a flawed servant for the family and the two previously mentioned female characters that cover the other two points of the love triangle – the film has enough power to cover the bases of being an effective action thriller. This allows its decent into the darkness of its second half to be an intriguing journey through hell for the lead character, even if there is never a sense that he is truly in danger.

To add to the intriguing execution of The Deadly Knives is the use of the legendary Yuen Woo Ping and Yuen Cheung-Yan as action directors for the film. After starting off with some classic Shaw Brothers hand to hand combat, the film quickly moves into more complex and larger fight sequences. There isn’t anything truly outrageous as the fights progress and I expected there to be a few more gimmicks considering the title of the film, but there are some fantastic larger set pieces to be aware of. Sequences where larger groups of fighters are combating one another with swords, fists, and sheer emotional power highlight the second half. The camera work and editing nimbly navigates the chaos with a steady eye for pacing and momentum and the splashes of blood and violence add to the darker tones.

Truthfully, the weakest aspects of The Deadly Knives come from its rather mundane plotting. The story of vicious Japanese business men fighting against honorable Chinese families is a story that was used again and again at this time period and the film doesn’t have a lot of gimmicks or a truly dynamic lead character to carry the film and lift it above some of its peers. However, a strong secondary set of characters, some solid performances, and a layered thematic narrative make The Deadly Knives a film that is much more effective than it should have been. The action increasingly gets more chaotic as it goes without having to rely too much on gimmicks and the tones and parallels of its darker material are not afraid to push into more exploitative territories. This is not the usual Shaw Brothers material that fans will love for its charming elements, but The Deadly Knives is worth seeing simply for its more serious and darker pieces.

Written By Matt Reifschneider
Posted by DarkReif at 10:40 AM