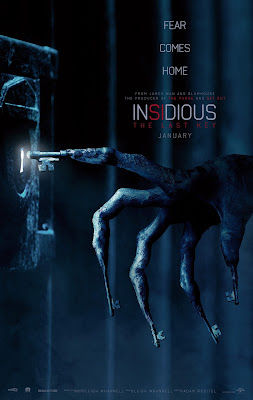 Even with its ups and downs of quality, set by a very high bar with the first Insidious, this modern horror franchise is perhaps still some of the most fun a horror fan can have with a mainstream series. Even when the second film added in a lot of strange layers or the third film stripped it back and shifted Lin Shaye into being the main protagonist, the creative energy and slick universe that was created with this franchise makes each entry entertaining. For this fourth one, which drops the Chapter portion of the title in the previous two sequels and goes with a standard subtitle in The Last Key, Insidious continues to embrace its blend of classic horror tension building with its modern blend of visual strength and genre bending. Like its two predecessors, The Last Key does struggle in trying to bite off more than it can chew when it comes to its script, but it’s still a fun time with plenty of audience pleasing jump scares and lots of intriguing themes to explore. While many other critics have already chosen to write off the franchise at this point and can’t look past the entertainment focused intensions of the film, Insidious: The Last Key is still a decent horror film and a great way to kick off the year in horror.

At this point, the Insidious franchise has run through most of the motions in its three previous entries. It was perhaps the biggest concern that was raised when this one was announced. Would The Last Key just be more of the same, an issue that bogged down Chapter 3, or would it try to expand its range which is the complexity that made Chapter 2 a muddled experience? In the smartest choice that writer Leigh Whannell and (new to the series) director Robitel would do, The Last Key instead opts to just twist the usual tropes in some fun directions. After a fantastic opening sequence, which explores franchise heroine Elise’s past with her family and starts the theme of ‘locked secrets’ that the film runs with, The Last Key doesn’t hesitate to establish the tropes but it also doesn’t hesitate to lay ground work to spin those into some new arenas and places that could add more material to the franchise in the future. It grounds some of the haunting aspects to reality in surprising ways and some early twists come out as pleasant surprises. Instead of using the duel plotting of the family in trouble and the paranormal investigators trying to help them, this one combines them and the manner that the film uses flashbacks and reveals between those and the current haunting feels fresher for the series and it’s a nice touch. Particularly because Elise, once again played by the legendary Lin Shaye, is a fantastic character to follow.

This new focus on Elise’s past with her family brings up some fantastic threads and themes in the film too. The use of keys, locks, secrets, and closed off areas is a fun expansion of the doors and pathway themes of previous entries which also centered around familial aspects. Not to get too in depth on the more interesting ways that the themes are approached, particularly because that would require spoilers, but The Last Key has a strong undercurrent of layers that lift it above what it might have been on the surface.

Granted, The Last Key can be a bit too ambitious for its own good and develops things that don’t necessarily coincide with its more mainstream appeals. The quick pacing of the film, which clocks in at just over an hour and a half, doesn’t allow it to hit those emotional beats as strongly as it might have or for the film to really explore some of the more interesting themes. The film easily could have added another half hour of material in the first and second acts to develop secondary characters that would have added to the artistic merit of the film, in particular when the film adds in Elise’s family members in the second act, but it tends to brush over those for the sake of pacing. This also goes for the film’s big bad, known as Key Face in the credits and played by the always impressive Javier Botet, whom is pushed to the back burner for a good portion of the film as it navigates other plotting. Being able to build more motivation behind it might have made his eventual arrival even more terrifying, but the film simply doesn’t have time for that as it tries to keep things crisp and brisk in its pacing.

In the end, Insidious: The Last Key is a film that is flawed, but still satiates all of the cravings that fans of the franchise will have. The story is both a stand-alone tale that works while continually weaving into the various other entries nicely, leading up to the first film chronologically by the end, and the scares had my theatrical audience in fits of gasps, screams, and giggles. Director Robitel handles the look and tone of the franchise with impressive finesse, showing that his debut with The Taking of Deborah Logan was not a fluke, and the cast balances the drama, horror, and humor with the same effort as previous entries. There’s a lot of gaps in the script that could have been expanded or filled for a more fulfilling experience that is obviously overlooked for the sake of keeping things simple and quick, but The Last Key entertains first and foremost. There will be a lot of hate for this film for the changes it makes to the formula and a lot of hate for its lack of courage to make bigger and more daring changes. For this reviewer though, The Last Key hit all of the right modern horror buttons that I wanted out of it.