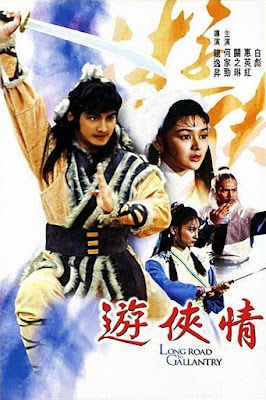 Truthfully, I went into Long Road to Gallantry with relatively open expectations. Various fellow Shaw Brothers fans online seemed mixed on the movie, either loving it immensely or writing it off as a fun, but expendable 80s Shaw wuxia. Outside of some of the strong casting, including a double dose of fantastic female martial artists in Kara Hui and Rosamund Kwan, the film had not crossed my viewing queue until recently. However, I’m always a sucker for some cheesy and outlandish wuxia and so when it popped up in my Amazon Prime recommendations it didn’t take much convincing to click the play button. Unlike much of the 80s wuxia that I had seen from Shaw thus far, Long Road to Gallantry is more in tune with the style of the genre from the 70s for the studio than that of the 80s. Tang Tak-Cheung, as a director and fight choreographer, is a bit of a throwback artist and doesn’t nearly embrace the special effects focused and outrageous fantasy that was getting popular by this time. Granted, the film does have plenty of silly wuxia elements and a pacing that’s borderline breakneck, so it’s quite entertaining in how it approaches its wuxia core.

There is an interesting approach that Long Road to Gallantry uses to create its dramatic dynamics for its characters. While the usual trope for a wuxia film features a young hero or heroine having to deal with complex martial arts world and training to be the hero that rights the wrongs and becomes a valiant member of society, this one presents its lead Du Mengfei, played with a playful arrogance by Kenny Ho, as something of a pawn within the dueling clan structure of the film. Not that this is necessarily new, particularly in the Shaw Brothers realm of wuxia, but Du Mengfei is rarely the protagonist that is driving the action of the film. Instead, he’s given a co-lead, Li Sai Nan who is played by the screen stealing Kara Hui, that really drives the action. This allows the film to develop a lot of fun chemistry from the two strong headed characters, throw in a love triangle that takes some wicked spins, and give the film a slightly emotional core that gives the entire paint-by-numbers wuxia clan feuds some motivation. The two women around Kenny Ho, as mentioned previously the other one is played by a young Rosamund Kwan who would later star in huge films like the Once Upon a Time in China series, carry a lot of the film and their dynamic with the “hero” (who is just bounced around between more powerful and more determined characters) makes the film quite enjoyable.

Outside of this intriguing dynamic that represents the bumbling male lead character, who must be saved as much as he tries to do any kind of saving, and the relationship he forms with the two main female characters, Long Road to Gallantry follows a pretty familiar pattern. The dueling clans are over the top in their characterizations, including costuming and super power gimmicks with one that sits on top of a snake throne and the other one that can freeze people’s veins with the palms of his hands, and the relentless scheming between the two is silly and often hilarious. Fortunately, there’s some emotional standing behind their motivations, courtesy of a flashback revealing that their feud stems from an incident concerning a two-volume manual to be an invincible fighter and how that power should be used. The story isn’t anything new, nor all that well developed for the biggest dramatic impact, but it’s streamlined to be entertaining.

Fortunately, for all of its predictable turns and twists in the script and formulaic character development, director Tang Tak-Cheung tries to overcome with being entertainingly over the top. Not only is Kenny Ho a somewhat bumbling and confused character, it’s REALLY confused. Kara Hui plays a love stricken and revenge focused bad ass, but she does it with outrageous charm and unstoppable charisma. The villains? Not only are they dressed in gimmicks to fit their personalities, but their reactions to everything are exaggerations of anything resembling realistic. It adds to the fantastical tone of Long Road to Gallantry and feeds into all aspects of it. Even the action, which is easily the most impressive part of the film as it combines wuxia style powers - the flipping of the characters as they fight in the wire work is deliriously over-the-top - and classic kung fu hand-to-hand combat, is fed by the energy of the film. Even the fact that they speed up the fights seems to be part of the fun. The choreography is clear and concise and the tone is tightly established to maximize audience enjoyment.

Long Road to Gallantry is not the best wuxia out there, certainly suffering from a lack of true character development and a script that doesn’t adhere so diligently to its formulas, but it certainly is very entertaining. It’s over the top, colorful, and the fight work is stellar in handling the energy of the performances and outlandishness of the characters. Fans of the 80s Shaw Brothers wuxia films will appreciate the gimmicks of the film, but Long Road to Gallantry throws back to the 70s films just enough that it makes for a refreshing blend...despite its obvious flaws.

Written By Matt Reifschneider
Posted by DarkReif at 11:49 AM