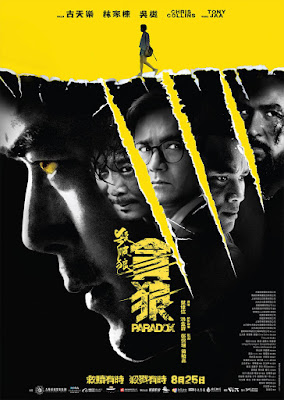 Wilson Yip has become one of the more interesting creative forces to arrive in the modern era from the Chinese film industry. Both as a director and producer, he has had a hand in creating some of the most iconic franchises in the last 20 years from China and his work with the iconic Donnie Yen truly skyrocketed the talented actor and martial artist into stardom. Yet, he doesn’t necessarily play things safe with his films. His latest, released under the title Paradox in English, is a ‘spin off’ of one of these franchises, the popular SPL films. While Paradox has yet to receive an official US release - for the record, the SPL films were retitled as Kill Zone for the US release so it may or may not acquire that title too, it’s a film that certainly should. It’s perhaps the weakest of the three SPL films thus far, but it’s still a film that dabbles in a lot of interesting dark territory with some stellar performances and blisters its audience with impressive action courtesy of the legendary Sammo Hung.

What makes Paradox such an interesting film overall is how the film it balances its tone and approach to its story. The story itself, which focuses on a distraught father, played by the always reliable Louis Koo, searching for his missing daughter in Thailand with the help of a couple of justice focused police officers (Wu Yue and a glorified action cameo by Tony Jaa), is not the most unique of stories. In many ways, it’s a combination of the two plots of the other SPL films and it takes the classic HK cops and criminals formula to heart. Yet, the film does some interesting things with it. Mostly it has a strange balance of super dark and dramatic themes with a bright and colorful set of visuals. The film does not hesitate to hammer down with an iron fist it’s themes about family and fatherhood. Some of it is pretty dark, particularly in the threaded flashbacks for Koo’s Lee Chung-Chi and how he treated his daughter which is paralleled by Wu Yue’s Chui Kit and his impending fatherhood or the shocking use of intense violence, but it is embedded in the beautiful and very colorful cinematography of the Thai landscape and city. It punctuates how there is a kind of darkness to light to life and it gives the film a fantastic tone and feeling to both the visuals and thoughtful layers that exist underneath the formulaic plot.

Beyond this tone and examinations of the dark/light aspects of people’s decisions concerning family as a theme, Paradox does stumble a bit in its plotting and character development. As mentioned, the film is mostly formulaic in how it approaches most of its material and there are portions of it that feel underdeveloped. Throughout the film, as it begins to build up the various villains that will come to clash with our heroic (and anti-heroic) characters, there’s a sense that the two are somewhat disconnected. If there had been a theme for the antagonists that somehow paralleled the motivations of the protagonists beyond the loose connections it has, the film’s twists and turns in the plot (which, no spoilers, do take some wild turns) would have emotionally resonated more effectively. As is, the film works, but there was potential for it to truly soar like its two predecessors that it doesn’t quite reach.

With those two things out of the way, it’s time to talk about the one thing that will attract the most viewers: the action. For all of its thriller elements, dramatic familial themes, or sharp visual design, Paradox is a Hong Kong action flick and it does not disappoint. Under the supervision of the previously mentioned Sammo Hung, the film blends classic and hard hitting HK fistacuffs with a bit of modern wire pizzazz and the results are pretty impressive. Louis Koo, who is not usually known for his abilities in hand to hand choreography or stunt work, looks impressive in the lead role while those around him, in particular the one major fight sequence with Tony Jaa, add a lot of excitement to the film. It’s not quite as spectacular as the work in the previous two films, but it holds its own wonderfully and action fans will definitely find their fair share to love.

If there is anything that one should take from this review it’s that despite not being as good as either SPL or SPL 2: A Time for Consequences, Paradox is an impressive action thriller with enough stylistic tone, thematically heavy narratives, and bone crunching action to satiate any Hong Kong fan’s craving. It fits in nicely with the series, although it certainly lacks some of the complexity and plot work to match its predecessors, and Wilson Yip should be proud of the interesting routes it takes. It deserves to be part of the iconic franchise and I sincerely hope the US release comes sooner rather than later…no matter what title it is under.

Written By Matt Reifschneider
Posted by DarkReif at 6:51 AM