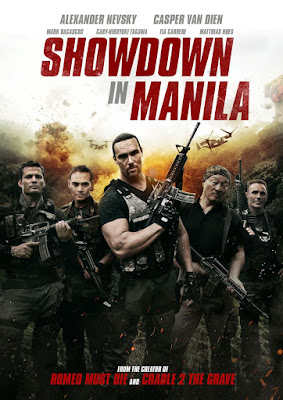 It’s not very often that one gets the opportunity to watch a Philippines/Russian co-production film that is an obvious love letter to the action films of Golan-Globus from the 1980s, but that’s one of the strange benefits of being a niche cinephile. For many people, that previous sentence sounds like torture as they would have to wallow through cheesy dialogue, broad caricatures that represent people, and the forced creativity of low budget film making, but for others – like me – a film like Showdown in Manila satiates the B-movie cravings that arise from exactly those things. Showdown in Manila is not what a traditional critic would call a ‘good’ film, but it’s a film that flexes its muscles when it comes to its A-list B-action cast and the throwback mixed formula that it utilizes. As a film on its own, it does crumble under any kind of legitimate critiques. However, with the right mindset and just a bit of nostalgia, Showdown in Manila works as a fun, cheesy, and entertaining 1980s throwback.

It’s not a huge step outside of the realm of possibility that director Mark Dacascos would want to gather together a slew of the second-tier action stars from decades past for an action film. The Expendables was a film that set this up as a kind of new formula for success. Is it new? Not really, but it certainly is a fresh mark for action fans pining for nostalgic moments. It’s this intention that is the most clearly stated mark of Showdown in Manila. This is a film meant to mix that nostalgia with a just a hint of fresh blood. The structure of the film, which can be boiled down into two halves, is based on classic action formulas. The first half introduces the audience to Nickolay, played with the wooden charm of early Arnold Schwarzenegger by Russian muscle mass Alexander Nevsky, as the usual burned cop turned private detective and his partner Charlie, played by a strangely entertaining Casper Van Dien, who’s only character trait is that he’s a playboy. They are given a task to hunt down Aldric Cole, played by the always entertain Cary-Hiroyuki Tagawa of Mortal Kombat fame, who just so happens to be the villain who got Nickolay fired from the police force and killed his team (fake gasp). The results are, pardon using the cinematic cliché, so bad they’re good.

In this first half, the film focuses a lot on just setting up the two lead characters, mostly Nickolay, and the charming relationship between them. Nevsky is wooden, sure, but in a weird way he’s balanced by the sheer overacting of Van Dien as his partner and by the time they are going to ‘get the team back together’ to stage a full on Golan-Globus inspired jungle siege on the villain’s almost comically small compound with the rest of the glorified cameos of B-action stars of yesteryear, the film has this weird energy that worked for me. There are a lot of problems with the script, which under develops every character and gives the loosest plot possible that patchwork quilts a lot of clichés together, but my expectations were low enough and the energy of the film is charming and funny enough to carry it much further than expected.

Truthfully, the most disappointing elements of Showdown in Manila come from the very sparse budget that doesn’t allow director Dacascos to utilize the film’s ambitious action concepts in most of its sequences and the under used all star B-action cast. Because the film has a lot of cast with most of the stars don't even show up until the last act, there isn’t a lot for them to do. Don ‘The Dragon’ Wilson and Cynthia Rothrock are not given nearly enough material that the martial arts action fan in me wanted and even the villains, played by Tagawa and Hues, show up for a few silly sequences and sort of patter out. Showdown in Manila could have been an instant B-action classic with a bit more scripting behind it and a budget to allow them to do more, but as is it’s more of a love letter to the action golden age more than anything else.

As I said, Showdown in Manila is not a good film. It really isn’t. It’s cheesy as hell, the writing is thin, and the characters barely constitute anything that would resemble people beyond the basic shells of one. Yet, there’s a kind of fun energy and love behind the film as a love letter to the B-action films of the 80s that hit all of the entertaining buttons for me. Call me crazy, but I had a lot of fun with this film despite its horrific and derailing flaws.

This is a film that only a handful of people will truly enjoy for what it is and you know who you are. If you are one of those people, then by all means – check out what Showdown in Manila has to offer. It’s not much, but it seems to know that and just does its best to be the love letter it wants to be.

Written By Matt Reifschneider
Posted by DarkReif at 7:19 PM