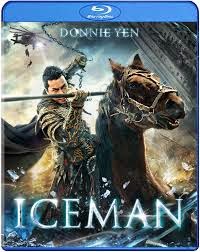 When Iceman was first announced as a vehicle for Donnie Yen, I was stoked. I mean, the film is still a remake of one of my favorite martial arts flicks in the 1989 Yuen Biao flick Iceman Cometh (you can read my very favorable review of that film HERE), but it’s a story that could use a facelift and the combination of Donnie Yen, physical comedian Wang Baoqiang, and director Law Wing-cheung certainly had my attention. The original one was a film that caked on humor, heart, and charm to achieve it’s goals. Iceman, unfortunately, features none of these traits. In fact, it might be one of the biggest disappointments of 2014.

He Ying (Donnie Yen) is a royal bodyguard in the Ming Dynasty, but when he is framed for treason against the Emperor while transporting a supposed time traveling device he is caught in an avalanche with his pursuers. In present day, he is found frozen and an accident leaves him unthawed in a world he doesn’t understand. With the help of a young escort, He Ying decides its time to rectify his past by finding the time machine and setting things right.

Iceman is a film that’s half thawed. While the original played up some fun ‘fish out of water’ humor, focused on the love story, and boiled its action down to massive stunt sequences and classic 80s Hong Kong combat, Iceman forgets to do any of these things. The romantic subplot is there, but it’s rarely effective or thought out as the chemistry between our two leads is sputtering at best, the villains of the film are less villains and more or less comedic antagonists (which I am sure will be played up in the eventual second film as a twist on the story - more on that in a second), and the action to plagued by terrible CGI. For a fun concept, I spent more time meandering through the awkwardness of the narrative and horrified at the massive amount of special effects than enjoying the film as a light hearted action flick. It’s almost like no one involved in Iceman knew what the hell they were doing. So they decided to just throw a bunch of things in there together to see if it would work. It doesn’t.


As if the failed execution on hand isn’t bad enough, they decide to throw in more plot to complicate the narrative even more. The addition of a mysterious Simon Yam as a corrupt businessman who seems to want something from our lackadaisical hero needlessly complicates the film throughout and the twist at the end really doesn’t make any sense for this portion of the film. The charm of the original one was its back to basics approach. Why make this one so damn confusing?

Now I understand that this is only one part of a two part film. As was reported during the filming, the inflated budget of Iceman made filmmakers split the film into two parts and perhaps once I see the second part more of this film will a) make sense or b) feel complete. As is though, Iceman ends on an awkward note with its messy storytelling and still fails to find any sort of thoughtful execution to the action, characters, or plot. If I'm dedicated two hours of my life to this I still want some sort of fulfillment.

As is, Iceman is a massive missed opportunity. With all of the talent involved, one would think that there would at least be an entertaining film to be found in Iceman, but alas it’s mostly just uncomfortable. Donnie Yen seemingly forces his way to charm through his 2D character, his supporting cast seems to be battling the terrible CGI action set pieces and their own poorly scripted scenes, and the narrative is sporadic at best. Somebody better put Iceman 2 back in the microwave because this first film is not cooked through. Perhaps then we will get a filling meal out of this deal.

BONUS RANT: How can a film featuring Donnie Yen not feature a kung fu fight sequence until well over an hour into the film? I mean, that’s just poor thinking right there.