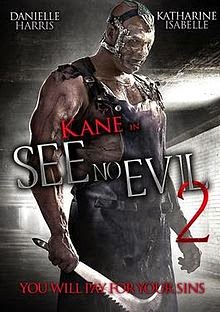 I was not a fan of the first See No Evil. It was too silly, too focused on that early 00s slasher style, and hard to buy into with its generic characters. It was fun in that B-grade film sort of way, but I don’t drink enough to truly enjoy that film. Thusly, I was somewhat baffled by the announcement of the sequel almost a decade (?!) after the first. I was even more baffled by the slew of ‘scream queens’ that signed onto the film including the ever charming Danielle Harris and Katherine Isabelle. Then it floored me when I read that the underrated and super talented Soska Sisters would be handling the directorial duties. Could it be that See No Evil 2 would be the film I so wanted from the original? In a way, yes it is. It’s more serious and the adherence to slasher tropes certainly doesn’t invoke the eye rolling as the first one did. In another way, no it isn't all that I wanted as See No Evil 2 tends to flounder with the blend of artful atmosphere and classic slasher elements. In the end, it’s just a mixed bag.

The night after the events of the first film, our villainous monster of a killer Jacob Goodnight (Kane) is on his way to the morgue. Unfortunately for our graveyard shift workers looking for a slow night to celebrate the birthday of their colleague Amy (Harris), he isn’t quite as dead as he would seem. Now it’s a race for survival as the group attempts to get out of the morgue before Goodnight puts them all to sleep.

Initially, I was loving See No Evil 2. The Soska Sisters proved they could do heavy horror character work with their phenomenal flick American Mary and they pull from that guide book for the first third of this one. The two main characters are delightfully real and their chemistry onscreen is effective, adding some fun (if not rather cliché) dynamics to the group that fills itself out with fodder for the slaughter like the asshole jock brother and the skanky friend. However, the wild card in this set up is the quirky and screen devouring work from Isabelle whose awkward friend adds a bit of tongue-in-cheek oddity to rather serious proceedings. The Soska Sisters add just enough artful atmosphere and thoughtful translation to a generic script to set up the film for success.


Unfortunately, it doesn’t fully last. Despite some solid efforts to create fresh feeling sets in an obvious low budget/one building second and third act, the film quickly becomes redundant and trudges along. There isn’t enough of the religious subtext for Goodnight to give him that edgy element (although there is a rather intriguing scene where his flashbacks interrupt his killing of the skanky character – her name eludes me unsurprisingly – but the film misses out on this opportunity to run with it) and it succumbs to the slasher formula too much to be nearly as interesting as it could have been. If the first film was too silly, it’s at this point that See No Evil 2 became almost too serious and it makes some of the more fun moments in the kills and chases feel a bit awkward. If it weren’t for the last ten minutes of the movie (where it takes some fun wicked turns and ends on a much stronger note), the film would have never lived up to its set up.

Perhaps it was my lofty expectations with the Soska Sisters at the helm that lead me down a path of disappointment for See No Evil 2, but this long awaited sequel lacked some of the fun to be entertaining and missed out on too many opportunities to take the film to the next level. The onscreen ensemble did a decent job and the Soska Sisters obviously did the best they could with the generic script they had. In the end though, See No Evil 2 sort of stumbles after a strong start only able to recover in fleeting moments.