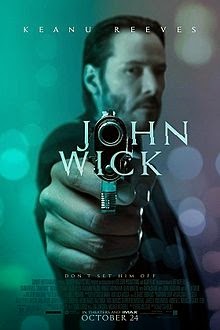 We’re fans of Keanu Reeves over at Blood Brothers. His contributions to genre film making as an actor (The Matrix, Speed) and as a director (Man of Tai Chi) are significant enough not to ignore, even if his acting can be less than inspired at times. Yet, I was inherently drawn to John Wick right from the start. After it ignited quite a bit of positive buzz on initial screenings, I was ecstatic to see the film. Now that I have seen it, I have to admit that John Wick lived up to all of my high expectations and then some. It’s simple, vicious, dark, and charming. Not to mention one of the most entertainingly violent movies I have seen all year. Seriously. It’s damn near Russian mob genocide onscreen. It’s just awesome.

John Wick (Reeves) is a simple man. After his wife falls ill and succumbs to the sickness, he is left with little in his life to love: his car and a young puppy that his wife left him on her deathbed. When a young Russian mobster breaks into his house, steals his car, and kills his dog, John Wick is left with only one option – to revert back to his old ways as an unstoppable killing machine.

John Wick is the kind of film that purely knows what it is, both as a throwback film and as a statement to move action movies back to the core of what made them so enjoyable to begin with. Directed by two stunt guys (who are both trained stuntmen and fight choreographers), John Wick keeps it simple with the plot and characters to give us the excess of style and the visuals. Keanu Reeves is not an actor with a massive range and John Wick plays up that fact to make this his best acting performance in decades. The character of John Wick is a myth. He is a stone-faced killer where emotion only slips through in minute moments and the film spends a pretty substantial amount of time building that up in the first half. It also builds up just enough back-story (via montage) to make the audience understand (even if it seems petty on surface level) what the titular character is going to unleash in the second half of the film. While the idea of Russian mobsters killing a puppy and stealing your car might seem petty to some, we understand through subtle moments from Reeves and in the narrative that this is a man who does not care about a lot. When you take those from him, he will bring the fucking apocalypse to your front door.

This is NOT a style over substance film though. In fact, the two blend impressively well. It just so happens that the substance is inherently molded into the style, a move that was perhaps best known in the late 80s and early 90s through the works of John Woo. Directors David Leitch and Chad Stahelski create a relatively simply and intriguingly fascinating universe that the film resides in. Rarely does John Wick spend justifying its quirky world where gold coins are used as assassin currency, an endless supply of half wit thugs line every corridor, and there exists a hotel where high paid killers can mingle without the burden of work influence. This isn’t an origin story for John Wick. If you don’t buy in, get out. Partnered with a deep visual style of neo noir neon lights and deep black shadows, John Wick is as visually appealing as it is straightforward in its narrative; a move that only enhances the richness of its simplicity. It’s a bare bones kind of film, but those bones are rarely broken by sticks, stones, or whatever one may have to say.

While the film itself is rather minimalist when it comes to its characters and plot, there is one thing that is excessive about John Wick: the action. Coming from stuntmen directors, I had high hopes for the action in the film and even in this element the film exceeds expectation. The influence of John Woo, beyond just the storytelling narrative, is massive here as the action piles upon itself in the second half delivering everything from martial arts grappling to gun fu to a car battle. That’s right. Not a car chase. A car battle. The violence is palpable in its delivery (there are so many head shots that trying to count them seems to be a task only for the most die hard of internet fans) and the relentless pacing of each action set piece in the latter portions of the film reach a fever pitch. Keanu Reeves seems up for the task in the film as the ‘bullet ballets’ and fighting continue to grow exponentially even if the highlight of the action comes from a vicious one man raid on a night club in the mid portion of the film.


For action fans, John Wick is not only a throwback to the golden age of beatdowns and bullet wounds, but it’s played with such artful skill that it’s hard not to love it through and through. One part neo noir, one part ‘heroic bloodshed,’ and one part early 80s Charles Bronson revenge thriller, John Wick is the best action flick of the year if not the best since The Raid. You owe yourself a favor to leap into the myth of John Wick.