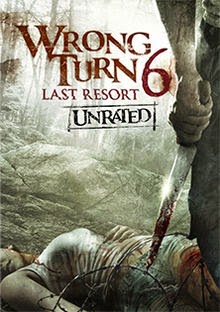 Sometimes franchises happen for the most unexpected films. Had you asked me if The Fast and the Furious would have spawned six sequels when I saw in theaters ages ago, I would have laughed in your face. I feel the same way about Wrong Turn. Don’t get me wrong as the first one was a decent slasher gem and the second one is a grindhouse tongue in cheek blast, but after that the quality of the films tank hard. In fact, they are bad enough that I gave this sixth entry, needlessly subtitled Last Resort, a two out of five…and it was a substantial improvement over the last three sequels. At this point though, you know whether or not Wrong Turn 6 is the film for you so quality isn’t probably a huge issue.

When Danny (Ilott) and his girlfriend Toni (Zoll) are summoned by Danny’s long lost birth family to come inherit a retreat in West Virginia, they decide to check it out. Bringing out a loud of generic siblings and friends (read: fodder for the slaughter), they arrive only to find the massive resort being run by two creepy caretakers (Jarvis and Katz). What are the true intentions of this inheritance and how is it connected with the three vicious deformed killers in the woods?

Truthfully, if you go into Wrong Turn 6 looking for a relevant plot then, buddy, you took a wrong turn into the wrong franchise. At this point, the inconsistency of continuity between the sequels is laughable at best as long as you don’t think too hard about it. Wrong Turn 6 does try to make a rather memorable plot with its weird ‘welcome to the family’ kind of twist, but it’s continued adherence to slasher tropes certainly makes it about as predictable as possible. Wrong Turn 6 is boobs, blood, and butchery. That’s the essentials of its plot. Even then, outside of what seems like a lot of sex in this entry, the kills are rarely memorable and the special effects are decent at best.


I would be lying if I said that I wasn’t somewhat excited that Declan O’Brien would not be directing this latest entry. If anything, it was work of franchise newcomer Valeri Milev that injects a bit of new energy into this franchise. Not that the woods of Bulgeria (where this was filmed) look anything like the woods of West Virginia, but it seems like Milev is doing the best he can with what little substance he has in the script. In fact, there is a sequence with a monologue about deer hunting where Danny is bow hunting in the woods that is cut together with the death of a local sheriff that is probably one of the best scenes that this franchise has seen in decades. So it has that going for it.

Other than that though, Wrong Turn 6 remains a generic and formulaic entry into a long buried franchise. Sure it’s a step up in quality thanks to Milev and some fun supporting performances (Katz and Jarvis seem to be having a lot of fun with their roles), but it is nothing to get overly excited about. I mean, it’s still the sixth entry of a slasher hillbilly franchise. So it’s not like I had a lot of hopes going into it to begin with. You either know if you want this in your collection or not before you see it.