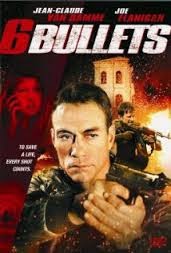 The later years of Van Damme’s career are fascinating in many ways. An action star more associated with his off screen antics in the 90s and his cheesy films has seemingly found redemption in the last decade. Whether it be one of the more defining roles as the villain in Expendables 2 or the meta performance delivered in JCVD, the Muscles from Brussels has turned a leaf. Even in a low budget action thriller like 6 Bullets, Van Damme seems intent on adding that extra layer of ‘lost soul’ to a rather by-the-numbers flick. It works very well for him. Partnered with another solid directorial effort from Ernie Barbarash and a solid enough script, 6 Bullets ends up being a rather surprising thriller that had me hooked.

After his arrogance leaves a handful of innocents dead from his mistakes, an ex-mercenary turned detective for hire Samson Gaul (Van Damme) decides to give up his life to find a simpler one as a butcher. When a couple of American tourists lose their daughter to a people traffickers he decides to step back in for one last shot at redemption…and he might ignite a bigger fight than he was expecting.

I’m not trying to say that 6 Bullets is some kind of Oscar worthy film that no one understands. It has its issues, particularly when it comes to its obvious budget and some of the mediocre acting. All I’m saying is that for a straight to home video action thriller affair, 6 Bullets is easily a mark above the regular fodder in the game. It plays its action sequences more for impact of characters than for entertainment (which may deter some fans) and focuses more on the thriller elements. In fact, the opening action set piece that features Van Damme slashing and dashing his way through a brothel and then igniting all the cars in the parking lot with balls of flame might be interpreted as ‘old school Van Damme.’ Which is all the more reflected by his character’s remorse for that style of thinking as he becomes consumed with redeeming himself from his brash past in thoughtful and meaningful choices. Might be an indicator in itself for Jean-Claude about the entire Damme career if you think about it too much.


Not that 6 Bullets is a full on thinking man’s thriller. It follows a decently predictable path of twists and surprises that most fans familiar with the genre will be able to dictate by just reading the synopsis. It does touch on some decent fun here and there (is his friend in the police force a rat?!) with some fun secondary performances. Van Damme’s son, who has now been featured in quite a few of his more recent flicks, struggles a bit here and there but does a fine job in the end and the missing child’s parents seem to be a bit too knowledgeable in violence to be wholly believable. Like I said, it’s not winning any Oscars.

6 Bullets is just a fun film that does an admirable job at justifying some of its dramatic moments for a budget bin kind of flick. The action bits are well shot, the tension is upright to get the job done, and the film generates a solid role for Van Damme. I’m really starting to think that director Ernie Barbarash is a guy to really get behind when it comes to straight to home video action. 6 Bullets is just more proof of that.