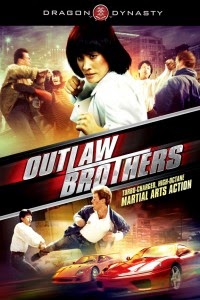 The work of Frankie Chan is not well known outside of the deeper fans of martial arts films. This is mostly due to the fact that he stayed behind the scenes as a director, composer, or a fight director. Outside of the villain role in The Prodigal Son and his directorial work on the mediocre Legendary Amazons, I can’t say I was fully aware of his contributions to Hong Kong cinema until I started doing some research on this film, Outlaw Brothers. This film, however, exists purely because of him. He directed it, choreographed it, scored it, and acted as one of the leads in it. While Outlaw Brothers has some issues with some of the silliness of the plots and surface level thinking, for Hong Kong action fans the film hits all of the right buttons.

James (Frankie Chan) and Bond (Siu Chung Mok) have created a very successful life for themselves by stealing high end cars as guns for hire. James, however, finds himself at a crossroads when a local and highly skilled police officer (Yukari Oshima) starts to investigate him for the car thefts. He decides to play a game of it and finds himself falling in love with the strong willed police officer and takes this as a sign to get out of the business. Not that it is as easy as it seems when he finds his sister is accidentally involved with a ruthless crime syndicate. Now he will have to take his street skills to the big guns to find a way out.

While the plot seemingly feels like your average comedic crime caper with a hero trying to escape the life for love and being repeatedly pulled back in, what makes Outlaw Brothers so much fun is just how ridiculously action packed the film plays out. Frankie Chan (serving as lead actor and chief fight choreographer) might lack a lot of the charm to pull of the some of the chemistry and humor of the film, but his fight work is fucking phenomenal. Blending traditional kung fu fights with some outrageous stunt work, this film consistently delivers on the goods. A broom sequence in the opening is vintage Jackie Chan style through and through in the blend of humor and ass kickery, the finale blends two fight sequences intercut with weapons and a questionable use of chickens, and a car chase in the middle portion features enough crazy dangerous stunts I’m shocked US safety laws allowed it to be shown even decades after its release.

The problem then remains that the film falters to take advantage of some of its assets to blend the action and comedy together. Namely it doesn’t give Yukari Oshima a very good character to be one of the leads. She has quite a bit of screen presence and her action sequences are a blast, but her chemistry with Frankie Chan is mostly miss and the romantic triangle is poorly arranged and often forced. The same goes for a lot of the other subplots included Bond and his girlfriend, the sister and her abusive husband, and the random emergence of the villains in the last half.

Luckily, Outlaw Brothers rides on its action and 80s silliness to still be a very entertaining film. Sure this 80s Hong Kong actioner has some pretty big issues with the writing and some of the subplot execution, but I still had a pretty massive grin on my face the entire time I was watching it. Even though the end product is hit or miss, Outlaw Brothers definitely makes me want to go start collecting some of Frankie Chan’s other stuff…which is recommendation enough.