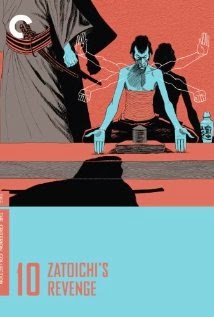 
“I don’t know who sent you, but you only get one life. You should guard it more carefully.” – Zatoichi

There have been many faces to the blind swordsman Zatoichi we have seen thus far. Zatoichi, the antihero. Zatoichi, the blamed. Zatoichi, the savior. Zatoichi, the father. Yet, Zatoichi’s Revenge showcases a rather new aspect for our lovable and overtly deadly protagonist: Zatoichi, the feminist. Now back in 1965 I’m sure that word didn’t have the meaning as it does today and I’m not here to get all political or stand on some sort of social soapbox – but again, it’s simply a new facet to the multitalented franchise and one that shows just how remarkable this series is in its tenth entry. And while Revenge lacks a bit of the emotional punch as some of the better films, the combination of thoughtful pacing, strong visuals, and well-written characters makes it one of the stronger entries.

The continually wandering Zatoichi (Shintaro Katsu) comes across one of his old homes, a town where he learned his massage trade from a kind old teacher. When he finds out that his old master has been killed and that his daughter has been sold into prostitution, Zatoichi uncovers a political and yakuza scheme that will have him on the run and fighting for the lives of a plethora of wrongfully indebted young women.

When it comes down to it, Zatoichi’s Revenge is more or less another entry into the long running series. It follows the basic formula we have seen established by now with Zatoichi stumbling into a town full of injustice and having to draw his cane sword in defense of oppressed. At this point there is not a whole lot of surprises to be had, outside of perhaps his now standardized duel with a corrupt ronin occurring to kick off the third act instead of closing it, and Revenge sits comfortably for fans of the franchise. What does sell this film as one of the better entries is the strong execution from the director and in the writing.

Following the trend to be less grindhouse and more classic sword fighting film that the last few entries harkened back towards, Revenge layers on a more serious approach to the proceedings and director Akira Inoue. Inoue frames every shot as its meant to be a picture and his love of creating depth and layering elements by placing objects or people close and/or in front of the action on screen makes each moment a rather intriguing visual spectacle. This leads to some of the franchise’s more memorable moments like a running shot where Zatoichi rips through an entire ally in chase of two of the villains cutting down thugs left and right and it crafts the rather formulaic approach as something fresh.

This is blended with some fun and thoughtful writing that embraces Zatoichi as a simple, but overly clever hero. The title Zatoichi’s Revenge might indicate a more emotional and personal plight against the villains, but outside of the initial set up the film plays it a bit safer than that instead focusing on how the baddies try to frame Zatoichi into their own game. This does allow for Zatoichi to team up with a humorous dice thrower to help him on his way, a character that adds an intriguing father/daughter subtext that works with the main plot’s ‘daughter of his master being wrongfully sold into prostitution.’ While it is not quite the father/son dynamic we last saw in Adventures of Zatoichi, it’s a nice addition to the regularly paint-by-numbers plot of the film.

Zatoichi’s Revenge might not be one of the most daring films for this franchise as it plays it relatively safe with the plot and style, but the execution of the script and visuals makes it rise above its own limits in many ways. Director Inoue delivers a film that feels fresh despite its formulaic approach and the continued strong work by Katsu and the supporting actors makes this entry one of my favorites. This one definitely comes highly recommended.