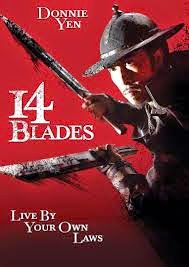 Sometimes being a foreign film fan can be a test of patience. For whatever reason, Donnie Yen has had a handful of films simply sit on the shelf for a US release and it makes fans a bit anxious. One of those was the pretty phenomenal The Lost Bladesman. The other one is the mixed results of 14 Blades, which, ironically, is the one of the two that finally saw a release here in the US. I had mixed feelings going into 14 Blades, particularly with Daniel Lee at the helm, and after the fact I feel even more torn. On one hand it’s an entertaining enough wuxia action flick, but on the other hand it’s utterly underwhelming with its predictable plot and often over zealous attempts at being epic – which is too often Daniel Lee’s calling card.

When the leader of a secret military unit Qinlong (Donnie Yen) is betrayed over the theft of a royal seal, he must dig into the mystery to uncover a larger conspiracy from royals in the Ming Dynasty. With the help of a delivery service team and rogue thieves, he will have to right all of the wrongs of his past and come to terms with his future.

Initially, I was hesitant to even touch 14 Blades thanks to Daniel Lee. For as many films as he gets to direct over in Hong Kong, you would think that his style would grow on me. It still hasn’t. He handles action sequences as though he attempts at making every shot a statement of ‘oh man, that’s so cool’ versus thoughtfully looking at pacing and relevance to film as a whole. 14 Blades is guilty of all of his normal sins. Terrible CGI plagues many of the bigger moments, he overly relies on slow motion for pacing, and his ridiculous over the top moments are less jaw dropping as much as they are giggle inducing. A vicious witch like villain in the film plays out more like a final boss level in a video game with her tactics of floating, spinning, and undressing (?) which makes it unintentionally funny. What could have been a fun repeated battle between our anti-hero and the main antagonist plays out too silly and too overzealous in its attempts to be ‘cool looking.’ It’s a maneuver that bleeds too often into the rest of the film.


Normally, the fantasy elements and over the top epic attempts in storytelling wouldn’t bother me all that much. It’s a fucking wuxia film after all. Yet, the almost comic bookish way that 14 Blades is told repeatedly undermines the better elements. Donnie Yen as an anti-hero with a box of fourteen blades on his back? Wish I cared more about him so I gave two shits about his plight. A romantic subplot with the charming Wei Zhao? Wish there was more chemistry. A slew of quirky secondary cast including the scene stealing Chun Wu as a master thief? Wish they had more screen time to take away from the wooden romantic plot and predictable main story. It’s as if 14 Blades really wants to be a magnificent wuxia film with all of the right pieces. Too bad none of those pieces are nearly as awesome as they would read on paper or fit together in a flowing narrative.

14 Blades is a film that entertains enough with some of its charming supporting cast and a decent enough performance from Donnie Yen, but the lacking cohesive flow, silly CGI riddled action set pieces, and over eager attempts at looking awesome make for a film that lacks the depth and execution to be one of the better modern wuxia films. Fans of Daniel Lee or Donnie Yen will probably still want to add this to their collection for various reasons, but those with a pickier taste in their foreign action cinema may want to hunt down and import a copy of The Lost Bladesman instead.