Creature from the Black Lagoon (1954) 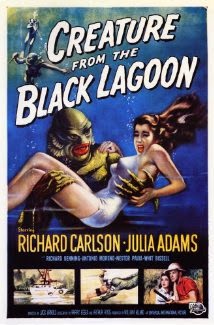 The classic Universal monsters of the 30s, 40s, and 50s have lasted a long time. Characters like Dracula, Frankenstein’s monster, and the Wolf Man have long endured decades of fans and spoofs. Yet, my personal favorite of the these iconic creatures is perhaps the most overlooked in many ways: the Creature from the Black Lagoon. While he was a bit late to the party, particularly notable as the last before the big boom of science fiction in the 50s, the first film of his shorter franchise is still a universally effective piece of cinema. The Creature from the Black Lagoon isn’t all that original, especially when compared to the themes and structure of its inspiration King Kong, but the combination of Jack Arnold’s knack for simplistic narrative and focus on thrilling moments makes it one of the best that Universal ever released.

It’s the scientific discovery of the decade, a small group of scientists have found a unique fossil in the Amazon. It’s the remnants of a fish man and one that could forever change the landscape of evolution. A small expedition lead by Dr. Reed (Carlson), his girlfriend Kay (Adams), and his boss Dr. Williams (Denning) are off to find the rest of the skeleton. What they find in the Black Lagoon though may be less dead than they thought and eager to interact with them.

While Creature from the Black Lagoon used the ‘beauty and the beast’ classic narrative and a 3D underwater gimmick to attract its audience, the film has held up remarkably well 60 years (!) after its release in 1954. A good portion of the universal aspect has to do with the continued relevance of its themes and message. Comparable to the before mentioned similarities to King Kong, Creature runs a message about the human nature to destroy what is around us in the name of science. This is depicted in many ways, but most notably it’s the extents that our ‘heroes’ in the film go to capture the Gillman before realizing that for each of their mistakes the Gillman’s own reaction further places them in danger. The invasion of his sacred time capsule in the lagoon, the poisoning of the water in attempts to capture him, and the introduction of an element that garners his attention: a beautiful woman. This creates an antagonist that is less of an antagonist and more of a physical reaction to man’s arrogance and ignorance to his own world. It crafts a monster that is merely a reflection of the scientists’ own egotism that succumbs to being a tragic figure in the big picture – one that simply doesn’t understand what is happening before being targeted for destruction.


The themes are amplified by the classic nature of the film’s execution on screen. While Julie Adams doesn’t play a whole lot more than a damsel in distress with one hell of a scream (it was still the 1950s), the rest of the cast adds some nice layers to the film. Intriguingly enough, this was the era where scientists became heroes more than mad villains and Creature does an admirably job portraying the two kinds of scientists that would work on screen: the thoughtful caring scientist (Carlson) and the brash, arrogant one (Denning) to add to the dramatic element on the boat. The setting might be small, most of this film takes place on a boat, but Jack Arnold ably blends the lush scenery, the claustrophobic space of the boat, and the suffocating underwater sequences to give the film quite the pacing. By the time you hit the third act and the audience realizes (with the characters) that the only way out is by going into the water, you’re tense with them.

Creature from the Black Lagoon is then punctuated, audibly with only a three note monster sound cue that’s used repeatedly, by a titular character. Crafted with shocking detail in scales and gill movement and given a unique life by two very talented actors in the suit (Ricou Browning does an marvelous job with giving the Gillman a unique swimming presence in the water sequences that includes the iconic ‘mirroring’ mid morning swim underneath a naive Kay), the not-so-villainous monster of the film is utterly memorable in look and presence. Just seeing his webbed hand curiously reach from the water towards an unknowing ankle becomes memorable and well pieced together.

While Dracula, Frankenstein’s monster, and The Wolf Man might get most of the attention from the Universal catalog, I would continue to argue that the Gillman and his first foray onto the silver screen still ranks as one of the best ‘creature features’ ever made. The execution is top notch combination of 50s science fiction and older horror flicks and the continued relevance of its themes 60 years later make it iconic. Creature from the Black Lagoon is classic for all the right reasons.