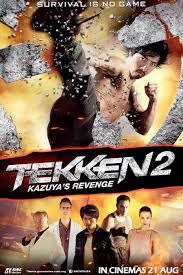 When it comes to video game adaptations, fighting games seem to be the most popular to be translated over and, generally speaking, most of them suck. For my favorite fighting game franchise, Tekken, the first live action film was a massive let down. The cheese and terrible acting hindered a potentially fun and action packed film and lead me thinking that it killed any potential for a film franchise from one of my favorite game series. I was wrong. Out of the blue comes Tekken 2: Kazuya’s Revenge (also known as Tekken: A Man Called X – whatever the hell that means) and I was actually excited again. Kane Kosugi as Kazuya? Gary Daniels? A less is more kind of plot synopsis? I was stoked to see what they low budget actioner could bring to this franchise. As it turns out, this film is actually worse than the first one. Worse. Way worse. Enough that I have to say it’s the worst action film I’ve seen this year and that’s saying something.

Kazuya (Kosugi) wakes up in a hotel room. His memory is wiped and a police unit is after him…on top of that he’s “saved” by Rhona (Wenham) and taken to The Minister (Serbedzija). The Minister enlists his service as an assassin in the city, but Kazuya is just starting to unravel his past…to discover what his future holds.

I’m guessing that this film wasn’t written to be a Tekken film initially. The premise of a man suffering from amnesia being used as an assassin isn’t all that original…and the way that Tekken 2 goes about using it is about as generic as possible. So what if they named a few of the characters after the game fighters? It’s still a very basic story. The terrible storytelling doesn’t sell the entire concept either. We are introduced to a pseudo-post apocalyptic world with ‘districts’ and…stuff. Kosugi is given an amnesiac assassin where he rarely is given much to get emotional over outside of some awkward flashbacks and an ill conceived romantic subplot that features one of the worst performances from an actress all year. He sort of wanders around confused and gets involved with other characters that we don’t give two shits about. Gary Daniels returns as his character Bryan Fury from the first Tekken, not that you would recognize him as he doesn’t even look like the same guy, and he shows up for a paycheck and disappears after a couple of minutes of worthless story. Even at its basic foundations, Tekken 2 is a terrible film: uninspired and lazy.

It’s not like every straight to DVD action flick needs a great story and great acting to pull off an entertaining film though. Most of them don’t. Even in the execution though, Tekken 2 feels utterly tired and insipid. Director Wych Kaos (whom you might know as the director of the eye-gouging bad Ballistic: Ecks Vs Sever) has no idea how to pace the film or give it the depth needed to even begin to sell its terrible script. The fight choreography might be just a tad better than the first film, but the lacking action in the finale, the disappointing match between Daniels and Kosugi, and the super serious tone of the film make sure that none of the action is enjoyable. I didn’t even have fun during this movie.

As an avid Tekken and action film fan, I can’t recommend Tekken 2 to ANYONE. At least the first film had the sad ability to be unintentionally entertaining with its ridiculous concepts and silly fight sequences. Tekken 2 is a sad excuse for an action film that has no character work, a nonsensical and poorly structured script, and action that has no meaning or depth. Even if you remotely liked the first film, I will just throw it out there to skip this one. It’s not worth the time or effort.