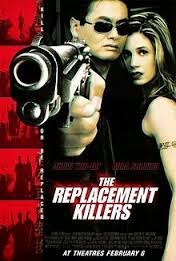 With the upcoming release of The Equalizer, I felt it was high time to revisit director Antoine Fuqua’s debut feature film The Replacement Killers. As a young man just discovering the brilliance of Hong Kong cinema in the late 90s and early 00s I was obsessed with this film. The combination of flashy American action style and the badassness of Chow Yun Fat really hit the spot. Rewatching the film as an adult has lead me to a few conclusions: firstly, the film is not as great as memory would indicate and secondly, the film is still utterly badass in many ways. Sure it’s a pretty simple film and it lacks some cohesive narrative at times, but I’d be lying if I didn’t say that I still was massively entertained by the entire thing. It might not be as classic as other Chow Yun Fat action vehicles like Hard Boiled or The Killer, but it’s still a blast.

John Lee (Chow Yun Fat) is indebted to Mr. Wei and he owes him three assassinations. The first ones are easy, rival gangsters in the US that don’t sport any threat to the gun fu talents of his double wielding handguns. The third however is a kill he cannot bring himself to finish and Mr. Wei is not happy with that. Now John Lee must get help from a rogue forger (Sorvino) to get out of the country before his replacement killers find him and make sure he stays…permanently.

Antoine Fuqua’s debut is, generally speaking, a mixed effort. The script is rather plain and there isn’t a lot of back story to build on for the various characters to have the emotional impact that they could have. Chow Yun Fat plays the vicious hitman with a heart…again. Mira Sorvino plays an edgy document forger that seemingly never has time to put on a damn shirt under her jacket. Yawn. At its core, this film is a pretty by-the-numbers action thriller that rarely inspires the kind of dedication that it could have with a bit more connection and depth to the various characters to heighten the situational tension. The narrative is predictable too which doesn’t help matter at all. Oh jeez, he has a change of heart and decides he needs to put a stop to the violence. Tell me more, movie.

The reason that this film is utterly badass is that it feels like the bastardized child between a 90s music video and a John Woo film. First time film director Antoine Fuqua owes a lot his style to John Woo for this picture (either that or the producers forced his hand towards that direction) and the resulting combination of bullet ballets and the bright colors and quirky side characters is something of the perfect example of 90s style. The film is littered with gun fights, done with the delicate balance of a dance ala Woo and Chow Yun Fat films previous like Hard Boiled, and The Replacement Killers keeps the pacing so quick and dirty that its hard not to just enjoy it for what it is as it vomits style-over-substance right in front of you. This film also has the benefit of having one of the greatest B-cult secondary casts of all time featuring the likes of Michael Rooker as the main cop and a set of villains that includes Kenneth Tsang, Jurgen Prochnow, Til Schweiger, and the ever awesome Danny Trejo. Trejo and Chow Yun Fat have a great gun battle on a fire escape in the final act that makes The Replacement Killers worth the watch just by itself.

While The Replacement Killers is not a perfect film with its cliché writing and often muddled script, it does have the benefit of feeling like a music video version of a John Woo film. It’s littered with fun and charming B-grade elements (seeing Chow Yun Fat stop himself from sliding in a car wash with the barrels of his duel handguns for example) and for those looking for a solid enough revenge action thriller it’s a decent choice. It still gets a big old recommendation from me.