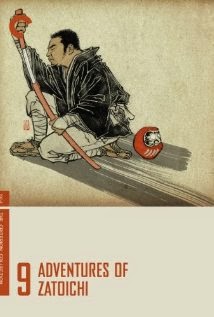 “It’s not that I’m strong. It’s that they’re weak.” –Zatoichi

Considering that the Zatoichi franchise kicked off in 1962 and the ninth entry of the series dropped in 1964 (the fourth film in the series just that year actually), you just have to assume that there are going to be some lackluster entries. Not that Adventures of Zatoichi is a bad film overall, this series has yet to truly have a terrible film, but it is one that definitely plays it safe. For fans of Zatoichi it’s still a fine entry that contains all the elements we have come to love from these films, but the overall quality is a big step down.

Zatoichi (Shintaro Katsu)has decided to visit a small village for New Year’s day, but on the way there he is asked by a stranger to deliver a note to a young woman in one of the inns. He accomplishes the task, but when he arrives he finds the town in dire tension from a corrupt magistrate. He also becomes involved in a murder mystery from another young woman who is looking for her father, the head of a village nearby that disappeared when coming to take to the magistrate. What Zatoichi will find is a conspiracy that digs deeper and weaves all of these issues together.

Truthfully there are many things to like about Adventures of Zatoichi, but few things to love about the film. The plot is an intriguing intertwining of separate threads that build into one massive mystery, but its fairly predictable through. The fight sequences might be impactful and well choreographed, but they are a bit sparse and the director fails to capitalize on making them as memorable as they could be including the finale with the soft falling snow at night. There is intriguing subtext about fathers and their sons, but the film misses some of the stronger emotional beats for it – particularly when we start to believe that perhaps the local drunk might be Zatoichi’s father. So as you can see there is a lot of opportunity for this film to build on its basics, but it misses a lot of the punches it needed to rise about being mediocre.

Perhaps the biggest issue that I have with Adventures of Zatoichi though is the lacking antagonist for the film. Most of the other films feature a somewhat memorable and divisive ronin for Zatoichi to square off against in the finale. In this film, they tease a big rivalry between a new ronin Gounosuke (played with a vicious subtlety by Mikijiro Hira of Three Outlaw Samurai and more recently 13 Assassins) and each of their meetings is lightning dynamic…but alas, like all of the examples from above, it’s too rare. Even their battle at the end misses a bit of emotional punch from being too brief. With the two phenomenal actors in these roles, this is easily one of the biggest missed opportunities.

For casual Zatoichi fans, Adventures is a safe and unoffensive bet. It’s certainly not as terrible as what many other reviewers and fans seem to say it is, but it’s definitely one of the weaker entries thus far in the series. At its core, Adventures really just lacks a distinct voice like many of the other entries do and unfortunately it undermines many of the better elements. It’s a decent flick, but hardly the best.