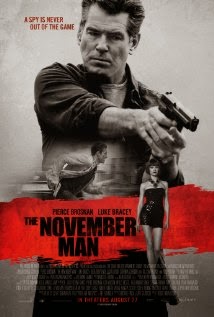 "This is my scenario."

Since leaving the world of James Bond after Die Another Day, Pierce Brosnan’s career has been a roller coaster one where he has refused to be cornered into doing Bond knock offs. When the trailer for The November Man hit online, I was shocked to see a Bond-esque film featuring the enigmatic Brosnan drop…theatrically on top of it. Don’t let those adverts fool you though; The November Man is NOT a Bond knock off. In fact, it’s relatively far from it. This film is a throwback style spy thriller that earns its ‘R’ rating with violence and some darker thematic material. It’s plot and character heavy and it came as a complete and utter pleasant surprise.

Devereaux (Brosnan) has been out of the game for five years or so living comfortably in solitude in Europe. When his ex-handler comes out to give him an op at the request of a Russian woman, he can’t say no. Unfortunately, the job is massively complicated and Devereaux is quick to find out that he might just be a pawn in a much bigger game. Now he’s on the hunt for a woman who knows information about an upcoming Russian President elect and he’s being hunted by his own protégé (Bracey). Shit has, quite frankly, hit the fan.

The best part of The November Man – and perhaps the most surprising – is how much of an anti-hero Brosnan plays in the role of Devereaux. Seriously, this guy is charming, as Brosnan always is on screen, but he’s a cold son of a bitch at times and it’s a delightful role that Brosnan seems to revel in with the film. Whether he’s dropping f-bombs, brashly party crashing on a strip club, or holding his protégé’s girlfriend hostage (the latter resulting in some of the best intense moments of the film), Brosnan is wholly up for the entire gig and plays the balance between cold killer and thoughtful hero with remarkable ease. If only his later Bond films would have utilized this more serious side of his acting abilities then perhaps he wouldn’t have been such a Roger Moore clone in the end. Luckily, this film makes up for a lot of it.

From there The November Man, like many of the newer throwback thrillers in the vein of Jack Reacher or Dead Man Down, caters heavily to a twisting plot painted with darker content. At times I was wishing that they would slow it down just a tad to give a bit more character work for the slew of characters in the film (his protégé Mason, despite the focus on him in the advertisements, tends to be one of the weaker characters overall), but the film moves at such a quick pace that rarely did I have time to notice the small things until well after the film had ended. The November Man does throw in plenty of action-oriented sequences to keep that pacing up and they work ridiculously well in the cat-n-mouse chase aspect of the film. Director Donaldson seems to know what it takes to make an old school written thriller like this appeal to a modern audience and he injects just enough pizzazz to keep the film a high-octane entertainer. There is even a pretty impressive fistfight between teacher and student in the final act that impressed the action fan in me.

The November Man is the kind of film that probably won’t attract a lot of massive attention from mainstream moviegoers, but it should. It’s a well-crafted action thriller that earns its merits from great characters and a relentless pacing punctuated with some action set pieces. While I’m sure Brosnan won’t see the Neeson bump that Taken gave him, but The November Man remains one of the biggest surprise of 2014 and one that hopefully earn Brosnan another franchise.

Written By Matt Reifschneider
Posted by DarkReif at 2:00 PM