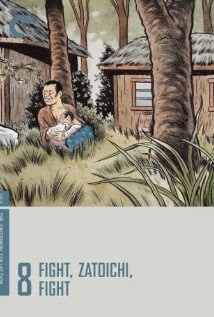 “You call yourselves human beings? So long as you can fill your own purses, you don’t give a damn what it might mean to someone else. Not even to an innocent child.”

When it comes down to it and your franchise is sliding in quality at a decent rate like Zatoichi had been for the last couple of films then go back to basics and find your footing. That is exactly what Fight, Zatoichi, Fight does. Despite its silly grindhouse sounding title, the franchise whips back to have Kenji Misumi, director of the first film, to helm this eighth entry and it reverts the style back into the character driven dramatic territory. It might not be the thrill n’ kill style that fans will have gotten used to with the last few films, but the thoughtful writing and impact is a welcome change of pace.

Zatoichi (Shintaro Katsu) continues to wander his way around Japan, desperately avoiding assassins at every turn. When a young woman traveling with her young baby son is killed by ronin who mistake her carriage for Zatoichi’s, Zatoichi takes it upon himself to deliver the baby to his father come hell or high water.

When I first read that Fight, Zatoichi, Fight would essentially throw in the gimmick that our heroic blind swordsman would be hindered by a baby, I was skeptical. I figured it would end up much like the previous entry with its comedic focus and silly fight sequences. This is not the case with this film though. Misumi decidedly takes a far more dramatic tone for the film focusing more on how the baby affects Zatoichi’s character than using it as a gimmick for entertainment. It’s shockingly effective. Katsu once again owns these various scenes milking them for those long dramatic beats and tugs on the viewer’s heartstrings as he makes a connection with another human being like we have never seen before. The addition of a ‘nanny’ – a thief hired by Zatoichi to help him – adds to the emotional impact too in the end of the film as this rag tag family fights their way to deliver this child.

That being said, the biggest thing that does suffer from the new focus on characters and interactions is the finale. While the film does move briskly with plenty of fighting throughout, the last few films have really set a new standard for an exciting last act and this is where Fight, Zatoichi, Fight struggles the most. While the film has a lot of emotional impact in the last 20 minutes, the actual final battle seems a bit brief and lacks some of the creative spectacle that the previous films had. I mean, outside of Zatoichi having to battle while partially on fire.

While Fight, Zatoichi, Fight might not be the most exciting of films as it lacks a bit of the thrill n’ kill style of the more grind oriented entries, the return to character driven dramatic beats is a welcome change of pace and ultimately makes this eighth entry better than the last few. The emotions run stronger, Katsu delivers another memorable performance, and the film is paced damn near perfectly. Had the finale been a bit more intense, then this one might have ranked up there with the best. As is, Fight, Zatoichi, Fight is a strong entry moving in the right direction.