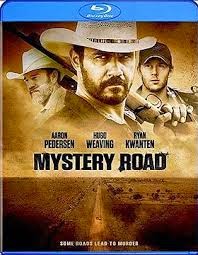 One has to admire a person that damn near does all of the major pieces for a film. If I am not mistaken, Ivan Sen might as well have acted all the roles in the film as he not only write and directed Mystery Road, but he was also the editor, cinematographer, and composer for the film. Considering the high-end execution of this subtle and slow burning drama thriller, I have to commend this film for those looking for a rather atmospheric flick... even if the writing comes off as a bit predictable and it leaves some of the subtle subplots feeling unfinished.

Jay (Pedersen) returns to the small Outback town he grew up in as a detective with a new outlook on life. He doesn’t return under the best circumstances as he begins to investigate the death of a young girl left in a ditch. The locals seem hesitant to let him back into their affairs though and once he starts to dig; he uncovers a much bigger crime that might leave him buried in his birthplace.

One thing I do have to recommend about Mystery Road, it’s that the film certainly sticks with you long after the film is done. The story is fairly simple and Sen plays it with even less complication as he focuses on adding in more subtlety than explosive moments. This does hinder the film from reaching the heights of other crime dramas like Gone Baby Gone or Mystic River which feature those kinds of explosive performances and emotionally devastating endings, but the resulting execution for the film is pretty impressive. In fact, a lot of the plot is so subtle that minute details feel like they might play bigger roles later in the film like a forensic phone call that details about the weird genetics of the dog bite on the victim…which is more or less dropped to being visual cues later on. The attention to the small details of the dialogue did keep my attention front and center on the plot and it made the slow burn tempo still a riveting watch.

Partnered with some stellar performances all the way around, particularly from Hugo Weaving whose shady police character devours scenes whole, Mystery Road does have a lot going for it. The biggest issue that remains for the film though is the shaky third act. Not to give too much away, but the action oriented finale feels a bit out of the blue and many of these subtle characters are left without much of an emotional punch. The father-daughter storyline felt terribly underplayed and the finale made the missed opportunity even greater as the film plays up her ‘disappearance’ as something much bigger than it turned out to be. It simply plays out in the most predictable ways with far too many characters left to the wolves as the plot attempted to wrap itself up nicely.

All in all though, I was particularly impressed with the sheer execution of the acting and meticulous attention to detail in Mystery Road. Sen has an eye from some subtle and impactful visuals and his character work is top notch, but the script could have used a few more drafts to flesh out more of the emotional aspects of the film. This is a director to keep an eye out for in the underground genre world as this film felt more like a test than a true attack on the art form he was attempting. Mystery Road might be flawed, but in many ways it’s these flaws that make the great aspects so appealing.