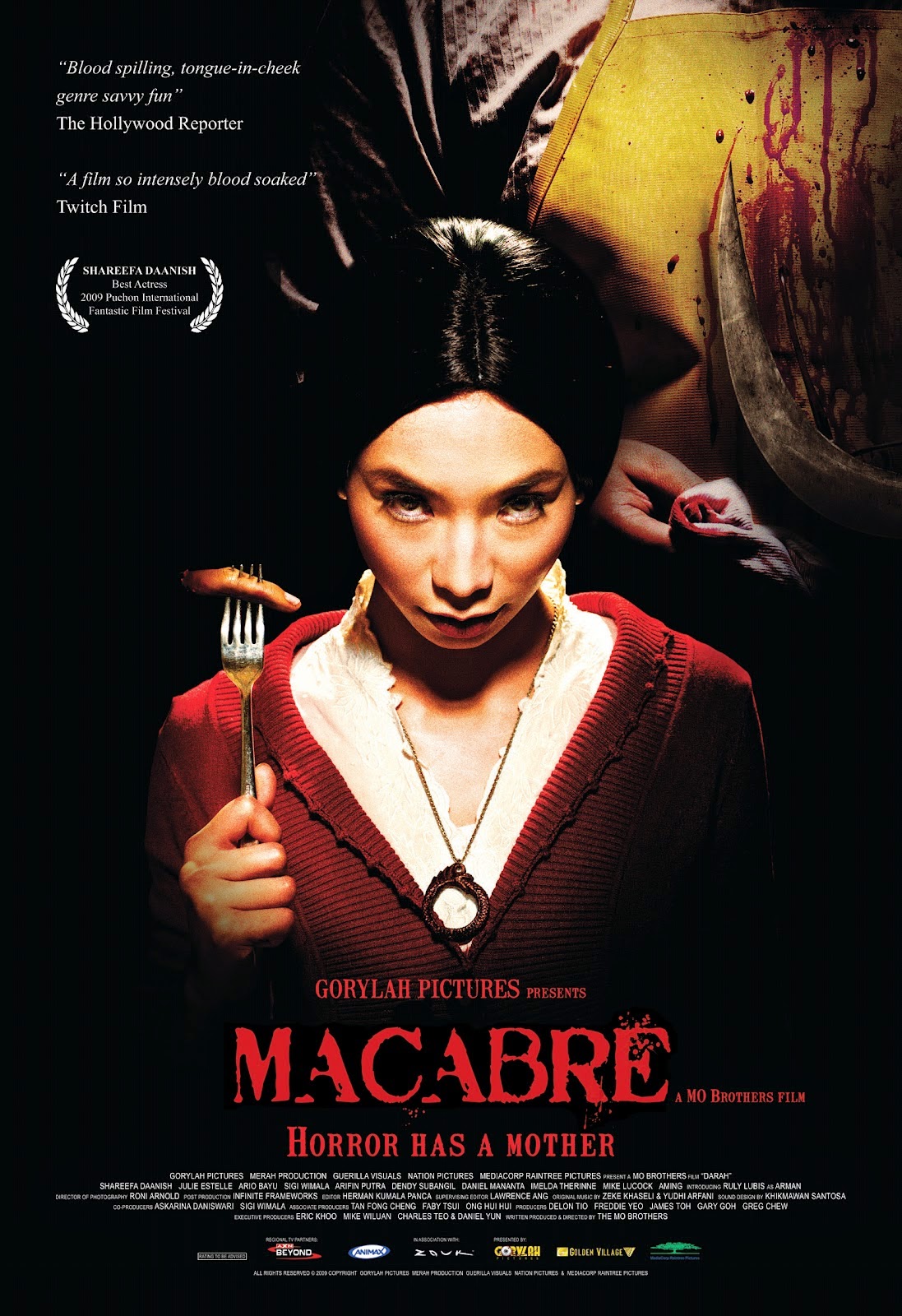 After the release of Gareth Evans' martial arts film, Merantau, I knew I had to seek out other talent coming from Indonesia. Well, to my surprise, there was almost no one I could find. I read up on Joko Anwar, but couldn't find any films he had done, and then I stumbled on to these two guys dubbing themselves Mo. Bros., and they, well Timo Tjahjanto, is good friends with the guy [didn't really know too much of him at the time] that made Merantau! Perfect! So I did some research and learned of a short they had made called Dara. I searched for it. Shit quality [online, not the short itself]. I passed. I looked for the film they expanded from it into a feature length, called Rumah Dara. Bingo. Anyway, long story short, a few years have since passed, and I figured with my brain recovering from the sheer epicness that was The Raid 2, I'd revisit an old favorite, and let me just say, it still hold up. I also want to note before going in, this film is streaming for FREE on Hulu. Only time I've ever used the site. So there shouldn't be any reason that those whom are interested can't find a way to, cause you can!

Macabre's set up is very simple, and very slasher typical, but it totally works. A group of people [check], are heading to the airport in Jakarta. When they go to take off, it starts to rain and they almost hit a woman. The woman, named Maya (Imelda Therinne) claims she has been robbed and needs a ride home. Seeing as how she appears to be an innocent woman stranded, they decide to drop her off at her home, which is pretty much on their way to the airport to begin with. When they arrive, she begs the group to come in and greet her mother. They agree and head into hell... I mean er... her house. So to cut the crap and get to the chase, you find out the family in the home is very Texas Chainsaw Massacre-esque and shit escalates quickly and a MASSIVE blood bath ensues. 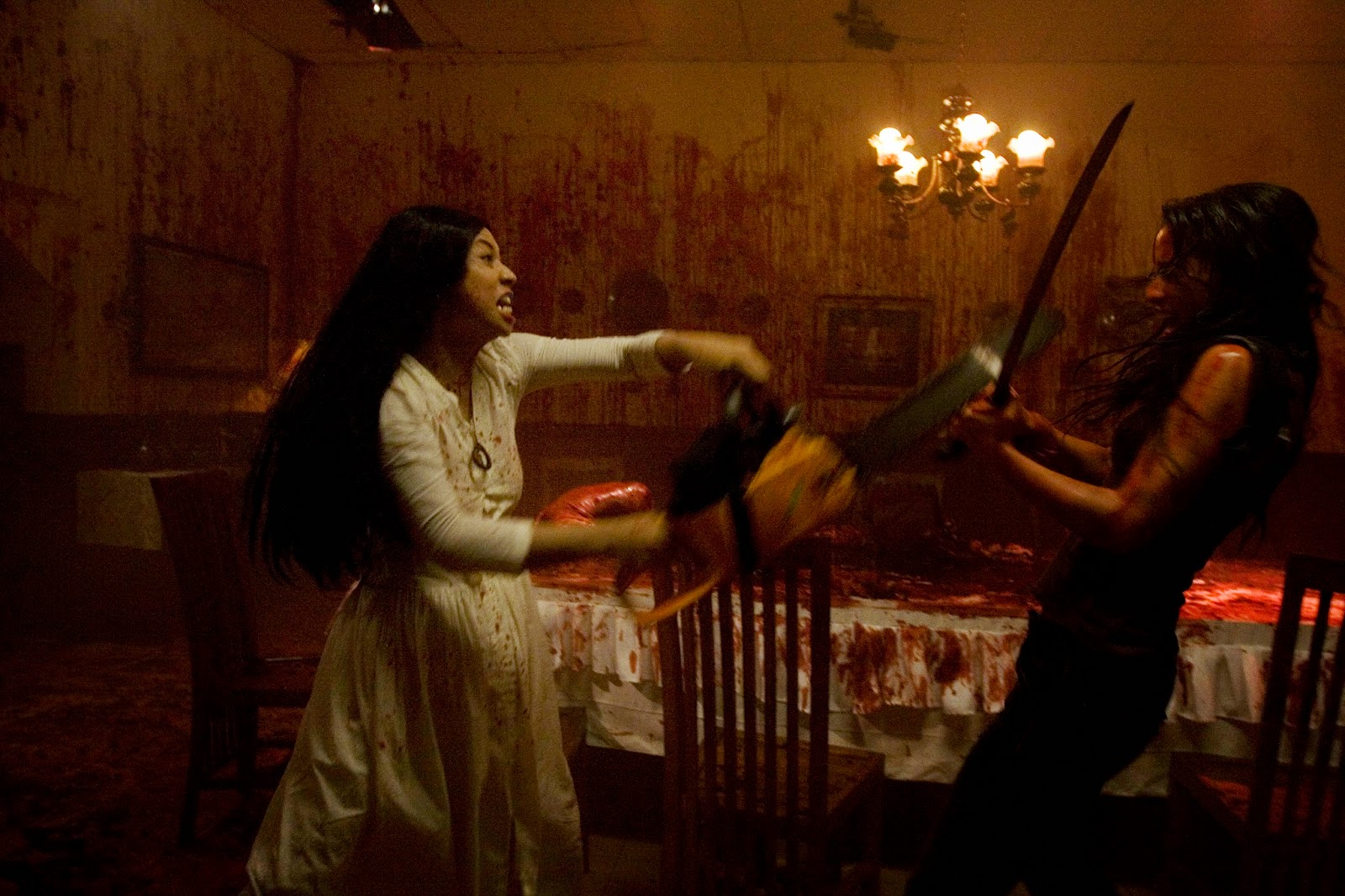 Bitch is c-r-a-z-y!!!
So essentially the film follows all of these friends trying to survive in this how filled with crazy mofo's. I hate saying this so casually, but hey, it's a slasher film, and it delivers on that end. It's exactly what you want out of a film like this. Blood... Gore... and one Badass B**ch!!! Ladya, who is the heroine of the film, played by the wonderful Julie Estelle [Raid 2] is incredibly believe and when she flips her lid, she goes in to total warrioress mode. It's quite the sight to behold. Now note, she isn't like ex-black ops B.A, she's simply a woman trying to survive. Another character I'd like to point out is Adam, played by yet another person who would go on to be in The Raid 2 later, Arifin Putra. He's lean, creepishly handsome, and evil s.o.b!!! He literally is the tank of the villains and every scene he was in I was like he's so badass. He's the one who just won't die, literally! I will say everyone is solid, but I have one more person to note, the main villain... villainess... or whatever she should be tagged as. Ms. Dara herself. She is one of the creepiest, if not the creepiest baddies I've ever witnessed in a horror film. Her eyes are something else. She could suck the soul right out of you. And her line delivery and her voice gives me the chills. She's a force to be reckoned with.
The film sort of paces itself much like Audition [well not quite to the same degree] and The Raid 2. It has setup and mood and sort of just slowly burns itself until the pot boils over... and then the entire stove explodes, and your house ends up on fire, and chars down into the ground. Yeah. It gets crazy! Blood, blood, and then even more blood. The kills range from 'oooh...' to 'OH SHIIIIIT!'. And there is a body count by the end of the film. Also, to be told, there is a fair amount of black humor in there, but not until towards the last act of the film. Also, the film pays respects to all of the classic slashers of yester years but also keeps things fresh and chaotic, and original at that. Again, the premise has been done several times, but the execution is where the film really shine, but then again, who the honestly watches a slasher for the story? No? No one? Exactly.
Also this film has your typical could there be more???, without spoiling anything, and that's fine. I highly doubt there will ever be a Macabre 2, at least not anytime soon. It's kind of a typical thing for horror movies, and especially slasher flicks, but c'mon, it's something we all can get excited about. And I will say there is some real similarities between the Chainsaw Massacre family and Dara's family, but overall this is far more fun a film. What film can't be compared to another though? 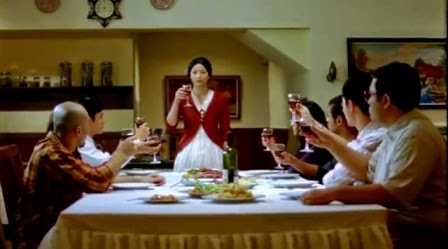 "Here's to me murdering all of you!"﻿
Like I keep saying throughout this review, if you want a bloody good time, just go ahead and seek out Macabre because you'll be glad you did. It's a lot of fun, and no, it's nothing like You're Next, which I loved as well, but I would say it ranks up there as one of the best slashers of the last 10 years. I can't wait to see what Timo does with Julie in The Night Comes for Us and to see what the Mo Brothers bring to the table in general. I am even more excited for their newest film, Killer(s), now. With as much blood that was spilled in the film, I think it's safe to say I'm willing to spill a few or more drops of my own.﻿