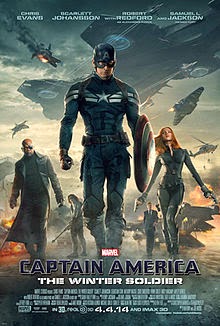 Marvel (and thusly Disney) has created some intriguing ideas with how they go about crafting their ‘universe’ in films. It has changed the film industry game in many ways. Crafting a network of individual films leading to crossover features where a variety of different elements all tie in together. Occasionally the films come off as mediocre summer blockbusters, like both of the Thor features, but as of lately Marvel seems to be hitting some impressive strides for franchise that probably shouldn’t be this damn good. I’m looking at you Captain America: The Winter Soldier.

Working with SHIELD has provided Steve Rogers aka Captain America (Chris Evans) some drive as he adapts to a modern world. The world has changed though with technology and a global network economy. Even war has seemingly taken a new path and SHIELD seems intent on preventing issues with extreme measures. So when a cynical Nick Fury (Jackson) uncovers a sinister plan by individuals in SHIELD, it will be up to Captain American and Black Widow (Johansson) to uncover those ready to take control of SHIELD for their own means.

Captain America has always been a hard sell for Marvel (just look at all of the failures they achieved attempting to put him to film previously), but the first film did a fine job at presenting him in period context for his origin even if it still comes off as rather cheesy and a bit too formulaic. It worked though. The true test was going to be this second film, a film that sees the rather gimmicky super hero in a modern context with a modern audience and a modern world concept. I can safely say that not only has Marvel succeeded in modernizing the hero for the screen, but they deliver one of their best films to date too.

Interestingly enough the main focus of The Winter Solider is not that of an action film, but one that cuts its teeth in paranoid espionage genre. Don’t get me wrong there is plenty of action to be had in this thoughtful sequel (more on that in a bit), but the focus is plot, character, and theme driven. A choice that seemingly works in spades as the audience is left desperately scrambling for whys, whos, and whens to some very sudden and brilliant plot twists. It works impressively as the audience learns to question the political and societal contexts of the faith we place in our leaders and one where Rogers proudly states “this is fear and not freedom” in a way that even those with little understanding of the modern state of the world can understand and seemingly side with no matter what your personal opinions of the matter lie. I won’t give too much away here when it comes to some of the intriguing threads that the film pulls from the first Captain America film and how it plays out, but understand that the film plays out on the formula of a thriller more so than a straight up action flick.

From there the surprising choice of the Russo Brothers as directors (seriously I had no idea that TV comedy directors could do a film like this) kicks in and slathers the film in charm. The writing might be tight and surprisingly relevant in today’s world, but the fantastic cast and a visual eye for spectacle helps to make sure that no one can really hate this film. The chemistry between Chris Evans and Scarlett Johansson is fun and palpable, the addition of Falcon works extremely well (well enough that I never even questioned the ridiculous idea of the wings until well after the film was over), and the villains of the film rock. While I felt like the main Winter Soldier plot thread got a little overlooked by the larger conspiracy plot, he’s a great antagonist that the Russo Brothers use extremely well as the best counter-part to Cap that they could have.

Then to top it off, the action is stellar in the film. As a fan of old school action (and in particular Hong Kong style action), I was stoked when this film threw in a ton of hand to hand combat material. Of all the Avengers, Cap is the most suited for this style of action and they really added a ton of great choreography and fist to cuffs into the film for fans like me. Between car chases, explosions, aerial combat, the hand to hand brawls, and enough spectacle to make Michael Bay approve The Winter Solider delivers on those promises too.

While I still probably enjoy The Avengers for its fun writing and the style of Iron Man 3 over this film – sue me, I’m a huge Shane Black fan – The Winter Soldier is another very, very impressive action film from Marvel. It’s smart, executed to near perfection, fun, and action packed. I had no idea that a Captain America franchise might end up being one of my favorites, but from the look of things that’s where it’s headed and it’s earning the praise every step of the way.