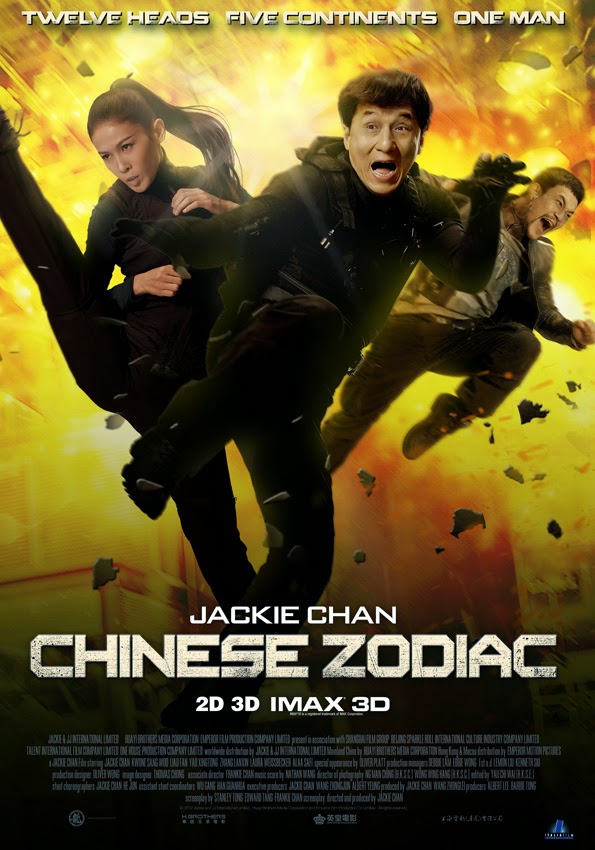 I would list Jackie Chan as one of my favorite actors of all time. He has a wide array of talents as an actor and an action guy which has lead a slew of his films to be instant classics the world around. When he announced he was going to head back to one of his classic franchises for a third entry with Chinese Zodiac (which is the third Armour of God film, known in China as CZ12), I was stoked. Even though my love of both Armour of God and Operation Condor are in the silliness of the films and their Indiana Jones-esque knock off ways, I was hoping for some awesome material. What I got with Chinese Zodiac was…not so awesome.

JC (Jackie Chan) and his team of adventurers for hire are sent by a very rich company to recover twelve bronze heads based on the Chinese zodiac. The problem that arises is that the heads have been missing for years and no one seems to know where they have ended up. So its up to JC, with the help of some friends and wacky technology, to track them down before his corrupt employers put an end to his journey…permanently.

To be honest, the first two films in this franchise aren’t great overall as the humor can be hit or miss and the stories are very cheesy. That being said, the action is phenomenal in them. I expect nothing less from Jackie Chan even 20 years later. Chinese Zodiac takes this to a whole new level or ridiculous and nonsensical though. Right away from the beginning with Chan’s roller-blading suit you know that you are going to have to suspend your belief system for the next hour and a half or else you are in for a shock. There is less classic action and far more spectacle and it can leave the viewer a bit cold. While there is (finally) a solid fight sequence in the last act and highlights the film with a fun camera shoot fight sequence that brings to mind classic era Jackie Chan, the rest can be almost too ridiculous including a sky diving scene that simply doesn’t work and feels tacked in.

The plot for Chinese Zodiac is ridiculously complicated for as basic as it is and most of it comes from the ridiculous amount of characters. As Jackie Chan just turned 60 this year, it’s obvious that he is stepping back from the high-octane action he used to do – and who can blame him? – and allows his team to shine for some good portions of the film. While the idea is sound, the execution of the team is hit or miss. The attempt at building these characters is done enough to get by, but not enough to truly care about what they have to offer. It does make some of the action set pieces more fun (including a pirate one that feels like it truly came from the cartoon Jackie Chan Adventures), but overall the results are wishy-washy at best.

Chinese Zodiac is not a bad film, but it certainly lacks the charm and strong execution that made these films so much fun in the 80s and 90s for Chan. The action tends to be a little too much spectacle oriented, some of the green screen and wire work is awkward, and the story leaves a lot to be desired. It’s still fun in some ways, but overall this is one of Chan’s more disappointing films in the last ten years.